Nikolay Udovichenko about status of Russian language, assistance to Kyrgyzstan 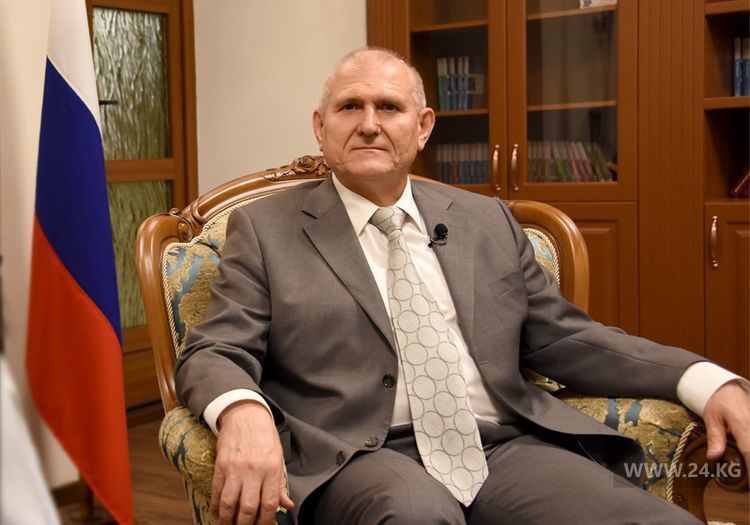 Today is Russia Day. On the eve of this holiday we talked with the Ambassador Extraordinary and Plenipotentiary of the Russian Federation to Kyrgyzstan, Nikolay Udovichenko, about the relations between the two countries, assistance during the coronavirus pandemic, and how the special status of the Russian language helps Kyrgyzstanis.

— How do you assess the level of relations between Russia and Kyrgyzstan? Where have we achieved success, and where, on the contrary, is still room for development?

— I can say without exaggeration that relations between our countries are at an extremely high level and, very importantly, are mutually beneficial and equal in nature.

Interaction covers almost all areas — from economy and culture to military-technical cooperation.

An important stage in this regard was the entry of Kyrgyzstan into the EAEU in 2015. Over five years, to a large extent thanks to participation in this integration union, the volume of the Kyrgyz economy has grown by 30 percent. Loans have been allocated for more than 2,500 projects in the agricultural and industrial sectors for a total amount of $ 400 million from the Russian-Kyrgyz Development Fund, which has been then created.

It is no coincidence that even during the period of quarantine restrictions due to the coronavirus, the volume of mutual trade between Kyrgyzstan and Russia increased by more than 15 percent.

Obviously, the agreement to hold the Cross Year of Russia and Kyrgyzstan is also an indicator of the level of relations.

— Coronavirus hit our countries hard. What do you think should be done to quickly return to normal operation mode?

— The outbreak of coronavirus has seriously affected our lives, requiring additional steps to adapt the economy and economic cooperation to new realities. I am convinced that it is necessary to move towards greater integration of economies, development of cooperation, creation of stress-resistant mechanisms that would ensure smooth functioning of the so-called «green corridors» under any circumstances. At the same time, we should step forward to formation of single markets of electricity, energy, use of national currencies in trade settlements. These are, in my opinion, the main directions and prospects of cooperation on a bilateral basis and within the framework of the EAEU.

— You have already touched on the theme of the Cross Year of Kyrgyzstan in Russia and Russia in Kyrgyzstan. Tell us what events are planned before the end of the year?

— I happened to take part in the opening of the Cross Year, which was held in Moscow at the Kremlin Palace in February with participation of the presidents of our two countries. And it was a striking scene. Then a series of other events was to take place — from mutual cultural tours to business meetings and youth forums — more than 100 major and important events in total.

— Did the outbreak of coronavirus made adjustments to this process?

— Of course, some programs have been transformed into online format, for example, the Literary Antivirus campaign, during which readers get acquainted with the works of Kyrgyz writers or Let’s sing, Friends! contest, dedicated to the Victory Day. On the occasion of the Russia Day on June 12, a concert of Russian and Kyrgyz artists without audience, but with television broadcasting, will be held at the Philharmonic Hall in Bishkek.

We would like to go beyond the screen frames as soon as possible.

Departments of the two countries are currently working to adjust the Cross Year program for the second half of the year, keeping the most significant events. The main thing for us is to quickly free ourselves from the infection that has entered our lives and return to normal life.

— When we talk about relations between Kyrgyzstan and Russia, it is not without mentioning that the Russian language has a special status in our country. How does it, in your opinion, help the Kyrgyzstanis, how important is it to preserve it?

— Kyrgyzstan and Russia are connected by hundreds of ties: these are family ties, cultural, business, scientific and technical ties. Knowledge of the Russian language is a natural competitive advantage for hundreds of thousands of citizens of Kyrgyzstan, especially those who live and work in Russia. The status of the Russian language as an official language allows to meet this need.

Today, I see it in practice, interest in learning the Russian language continues to persist in Kyrgyzstan.

Numerous appeals to the Embassy with requests for expanding teaching and support for Russian-speaking classes testify to its relevance in the educational environment, at the level of school education. In 2020, at least 16 teachers from Russia were sent to Osh to assist in this matter. The project received support from the leadership of the Ministry of Education and Science of Kyrgyzstan, and we intend to develop it. As you know, the branches of Russian universities operate in the country, opening of a branch of the Moscow State University in Osh city is planned. Great interest is shown in studying in Russia, including on a budget-funded basis.

The Russian language performs an important social function of a language of interethnic communication for dozens of ethnic groups living in Kyrgyzstan. At the same time, the Russian language does not compete with the Kyrgyz language. They mutually enrich each other. 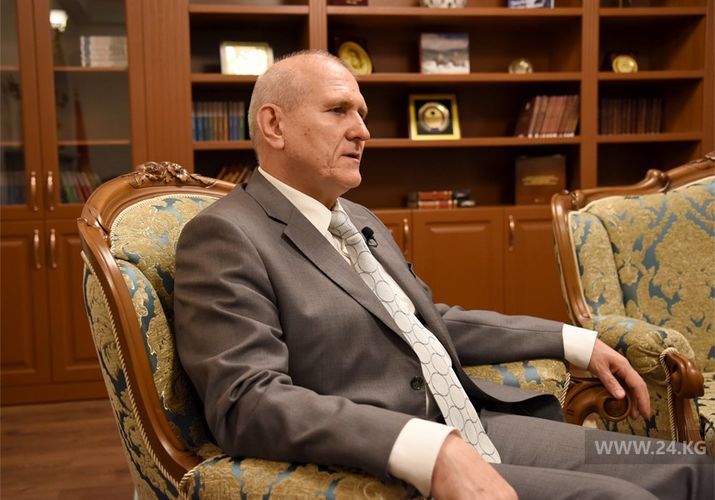 One cannot but take into account that the Russian language is one of the official languages ​​of such authoritative international organizations as the UN, SCO, CSTO and the EAEU. In brief, it was not by chance that the great Chingiz Aitmatov spoke of the Kyrgyz and Russian languages ​​as the wings of one bird.

— Tell us about the military-political cooperation of our countries.

— Russian-Kyrgyz cooperation in the military-technical sphere is dynamic. The main task is to ensure security from external threats, to combat the spread of terrorism and extremism. These tasks are being successfully solved on a bilateral basis and within the framework of the CSTO, including involving the airbase in Kant.

As part of military-technical assistance in 2019, the Kyrgyz side has been transferred military equipment for about 400 million rubles.

Including the republic received landing transport helicopters and armored reconnaissance and landing vehicles. An important factor is the holding of joint exercises.

By the way, in connection with the spread of coronavirus infection in April 2020, several thousand protective suits have been handed over to the Armed Forces of Kyrgyzstan.

We intend to further develop cooperation in the military sphere, including providing the necessary assistance in equipping the Kyrgyz army with modern weapons.

— What assistance has Russia provided to Kyrgyzstan in the fight against coronavirus?

— The topic of mutual support, especially in crisis situations, is of particular importance. Such assistance is provided also today, although the pandemic has affected almost the entire planet. As for Russia, such assistance goes in various directions.

For the effective fight against the viral infection and in the most acute period for Kyrgyzstan, test kits have been delivered that made it possible to conduct the first 50,000 analyzes. Thermal imagers and personal protective equipment have been also transferred.

An important decision was to allocate 35,000 tons of wheat on favorable terms from Russian material reserves, 10,000 tons of which have already been delivered.

Direct assistance to the population was provided through a Russian target contribution to the UN WFP program. It has already been received by 30,000 people. Assistance campaigns were also carried out through individual Russian regions. As for the business, the Russian-Kyrgyz Development Fund has taken anti-crisis measures regarding the deferral of debt payment and introduction of a moratorium on the payment of interest on credit debt.

Work in this direction continues. The main thing, of course, would be fastest, full-scale launch of economic cooperation, including opening of common borders.