Sapar Isakov about ties of Khabibula Abdukadyr with Matraimov, Jeenbekov

In June 2019, the former Prime Minister of Kyrgyzstan Sapar Isakov, kept in the pre-trial detention center of the State Committee for National Security, made a statement. In it, he told about the ties of a Chinese businessman Khabibula Abdukadyr with Raiymbek Matraimov and Sooronbai Jeenbekov.

24.kg news agency decided to recall that letter from Sapar Isakov in the light of a high-profile investigation by Azattyk, Kloop and OCCRP about withdrawal of millions of dollars from Kyrgyzstan, and who of the Kyrgyz officials helped with this.

Related news
Investigation of journalists: Smuggling schemes lead to clan of Raiym Matraimov
The former head of Government also said that in 2017 he received Abdukadyr at the Government House at the request of the current head of state. The businessman then came to the Cabinet as a representative of AKA group of companies.

«In November or December 2017 (Begimai Akimbaeva, who kept my hourly electronic work schedule, can clarify), at the request of the President Sooronbai Jeenbekov, I received Khabibula (I don’t remember his last name), head of AKA group of companies. The head of state noted that the group of companies had huge capital and intended to invest significant funds in the economy of the republic. On the same day I received Khabibula in my office,» the ex-head of the Cabinet wrote.

Khabibula arrived at the Government House, accompanied by the guard of the President Sooronbai Jeenbekov, that is, not through the visitors pass desk. This can be confirmed by Begimai Akimbaeva and the former head of security.

He noted that he had discussed major projects with the businessman. Khabibula Abdukadyr showed the greatest interest in MegaCom, Kyrgyzstan airline, investing funds in construction of an industrial and logistics center in the territory of Naryn Free Economic Zone. 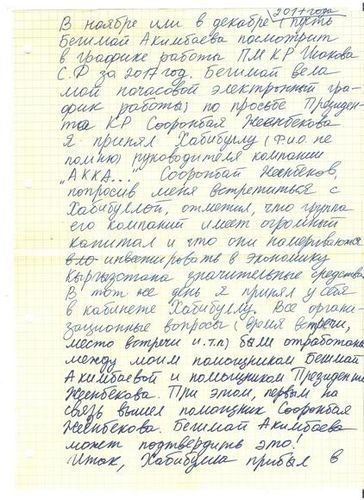 According to the former prime minister, it later became known that Huawei and AKA agreed to work together to invest in Safe City project. «It should be noted that the Government did not participate in negotiations on cooperation between the investor and AKA. After careful elaboration of the draft agreement on the implementation of Safe City, the parties signed it,» recalls Sapar Isakov.

Recall, the agreement was terminated later.

«About a week later, when I was dismissed, I learned from some sources that the head of AKA had long-standing ties with Raiymbek Matraimov. But, unfortunately, I didn’t have any facts on hand,» summed up Sapar Isakov.