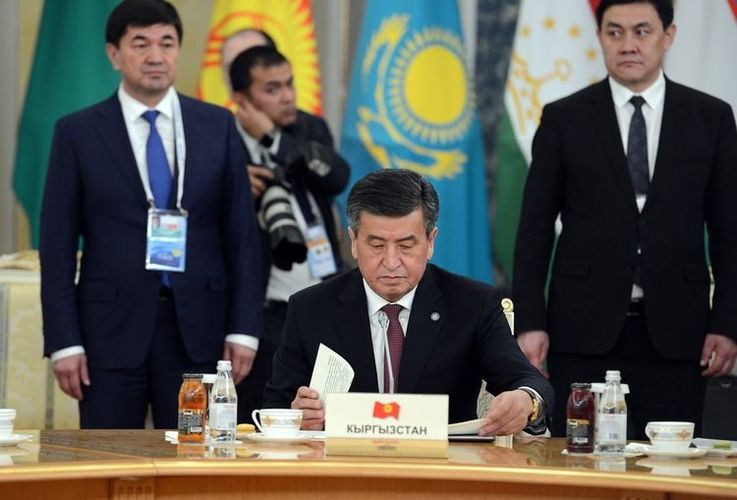 The President of Kyrgyzstan Sooronbai Jeenbekov at the first consultative meeting of the heads of Central Asian states in Astana stated that today’s task is to rebuild regional cooperation for the sake of the welfare of the peoples of the Central Asian countries. The Information Policy Department of the Presidential Administration reported.

Historically, Central Asia was a region of religious and interethnic tolerance.

Sooronbai Jeenbekov stressed that today’s meeting would serve to renewal and promotion of friendly and good-neighborly relations. The President of Kyrgyzstan noted the symbolism of the meeting of the heads of Central Asian states before Nooruz holiday — an embodiment of friendship, peace and renewal.

He added that today in Astana there was a good opportunity to share views on the current situation and prospects for regional cooperation. «This must be done in the interests not only of the present, but also of future generations of Central Asian countries. Therefore, I was pleased to support the initiative of the President of Uzbekistan to hold regular meetings of the heads of our countries. I think that they can serve not only for mutual integration, but also for enhancing the role and place of our region in the world,» said Sooronbai Jeenbekov.

The President noted that the importance of each country in the region would grow if they come forward from a unified position. «The strategic interests of the countries of the region coincide, the peoples can and should develop in conditions of friendship and good-neighborliness. Closer cultural and economic ties will contribute to the sustainable development of each country,» he said and stressed that extremism was alien to the set of mind of the peoples of Central Asia.

We need to confront terrorism and extremism, other challenges and threats. Kyrgyzstan stands for the formation of a common security space and joint actions to keep peace and stability in the region.

He believes that it is important to maximally use the existing potential of the region in the sphere of trade and economic cooperation.

«We must create more favorable conditions for the free movement of goods and services between our countries by reducing existing barriers to trade and bureaucratic delays. It is expedient to create free transit corridors, improve our cooperation in the passenger, freight traffic and transit through the territories of our countries on a non-permissible basis,» said Sooronbai Jeenbekov.

Expansion of international roads and railways, logistics centers and transport terminals is a priority. It is important to modernize the common infrastructure for uninterrupted international transit.

«Water and energy cooperation is also of great importance. Ensuring energy security is one of the priority areas for sustainable development of the region. Our countries have a significant energy potential, including hydrocarbon resources and hydropower capabilities. Therefore, we support the establishment of long-term mutually beneficial cooperation in the water and energy sector,» the President of the Kyrgyz Republic noted.

Sooronbai Jeenbekov stressed that this year Kyrgyzstan plans to hold a number of cultural and sports events, in particular, the 3rd World Nomad Games and events dedicated to the 90th anniversary of the great writer Chingiz Aitmatov, and invited the honored guests from Central Asia.