State visit of Atambayev to Russia - last one before presidential elections 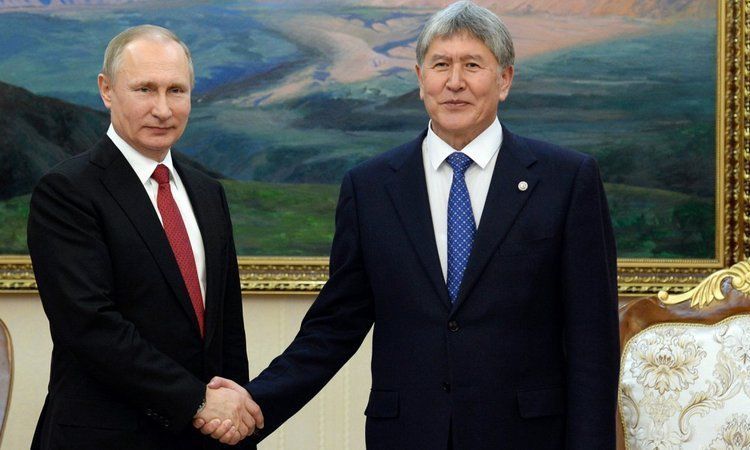 The President of Kyrgyzstan will pay a state visit to  today. Almazbek Atambayev was invited personally by Vladimir Putin. This is the first state visit of the President to . Before that, during the years of the presidency, he made two state visits — to  (in May 2014) and to  (in December 2016).

In , Almazbek Atambayev will visit three cities — , and .

is the main strategic partner and sales market for . This is confirmed by fairly frequent meetings of the leaders of two states. Since 2012 till 2017, Almazbek Atambayev and Vladimir Putin have met 20 times. Only this year, they discussed bilateral relations three times. Presidents use every opportunity to talk.

Almazbek Atambayev and Vladimir Putin regularly talk by phone. This year, they talked by the phone three times — on March 20, on the occasion of the 25th anniversary of the establishment of diplomatic relations between the countries, on April 24 and on May 5.

The fourth meeting of the leaders of two countries for six months will be held on June . According to the official website of the Russian President, the parties will discuss key issues of bilateral relations and outline measures to further develop mutually beneficial cooperation in the political, trade-economic, cultural, humanitarian and scientific spheres.

«Besides, they will exchange views on various aspects of promoting integration processes in the Eurasian space, on a number of pressing international and regional problems," the Kremlin press service commented.

Recall, the diplomatic relations between and were established on March 20, 1992. The basic political documents are the Treaty on Friendship, Cooperation and Mutual Assistance dated June 10, 1992, and the Declaration of Eternal Friendship, and Partnership dated July 27, 2000.

Another important political document is expected to be signed during the state visit: a declaration on strengthening the alliance and strategic partnership between Kyrgyzstan and Russia.

We have been friends with for a long time. There are three main spheres in this cooperation. One of them is military and military-technical cooperation. It is  that has recently supplied arms and military equipment to . During a recent meeting of the interstate commission for military and economic cooperation of CSTO it became known that the is ready to invest in the resuscitation of idle defense plants in .

The second important area of ​​cooperation is trade. is the main market for Kyrgyz products. We started supplying more goods to  after the entry into the Eurasian Economic Union. In the first quarter of 2017, exports amounted to $ 327.6 million, increasing by 22.8 percent compared to 2016.

The third important area of ​​cooperation between the two countries is migration. More than half a million of our citizens are outside of . Most of them work in . Therefore, it is extremely important for the state to protect their interests. As of April 1, there were 612,000 Kyrgyz citizens in .

Our citizens received a number of indulgences after the accession of  to EEU. However, the issue of withdrawal of migrants from from the black list of migrants, who are banned from entering , remains relevant.

For five months, migrants have transferred $ 615.1 million to Kyrgyzstan.

«One of the problems in  is the so-called black list, which in 2014 included 180,000 people. For two years with the help of deputies, the President, the Prime Minister, the list was reduced to 106,000. We hope that in 2017 it will be reduced by another 44,000 people," Deputy Chairman of the State Migration Service Almaz Asanbayev said at the meeting of Onuguu-Progress parliamentary faction.

In addition to , Almazbek Atambayev will visit the capitals of Bashkortostan and Tatarstan — and Kazan. It is noted that the parties will discuss the development of interregional cooperation. Simply said, wants to establish trade contacts with the regions of . And it’s not just about the opportunity to supply goods here, but also about creation joint ventures in  itself.

Economic cooperation with the region is just beginning so far. But the cultural and humanitarian one develops actively. The Public Association Tatar-Bashkir Cultural Center Tugan Tel of the Assembly of the Peoples' of Kyrgyzstan is working in Kyrgyzstan; in the Osh region — Bashkir Public Center Ak Tirma, in Karakol -Tatar-Bashkir Society Tatyulyk, in Kara-Balta — Bashkir-Tatar Cultural center Idel. The same centers were opened in Talas, Kant, Cholpon-Ata, , Batken, Tokmak.

has registered regional public organization Kyrgyz Cultural Center Ala-Too, which in 2013 became the owner of a grant of 200,000 rubles from the president of this republic.

As for Tatarstan, cooperation with it is based on the Agreement on Trade-Economic, Scientific-Technical and Cultural Cooperation dated April 4, 1996.

Imports also fell 1.5 times to $ 27.1 million, while exports increased 1.9 times, to $ 224,500. We cooperate with such enterprises of Tatarstan as KamAZ JJSC, Tatneft PJSC, TAIF OJSC, Tatkhimpharmpreparaty JSC. Regular flights are performed between Bishkek and Kazan.

In the 2016/2017 academic year, 593 students from studied at the universities of Tatarstan.

Tatarstan has the ethnic and cultural autonomy of the Kyrgyz Yntymak, which is included in the number of 35 communities of the republic.

The Tatar-Bashkir cultural center Tugan Tel works in . The Tatar diaspora in the republic includes 50,000 people. The Kyrgyz side regularly participates in Kazan International Festival of Muslim Cinema, international theater, music and other festivals of the Turkic peoples. And the Tatar side constantly holds Sabantuy national holiday in .