President of Kyrgyzstan calls on to follow example of Putin 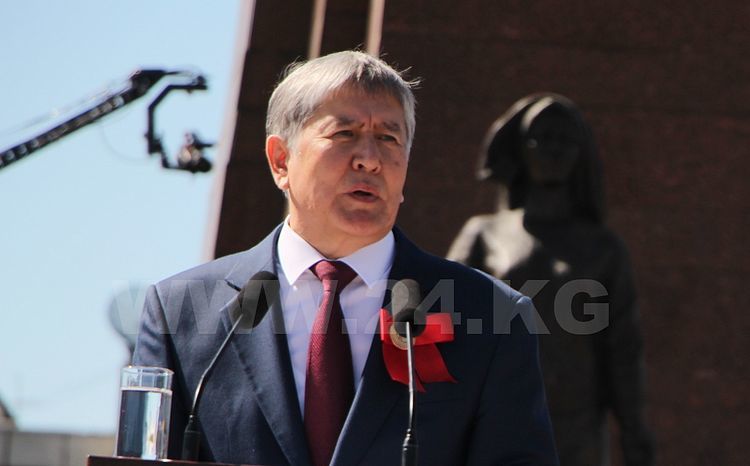 Photo 24.kg news agency
«For those who don’t know the history of the peoples of , I want to recall that the Kyrgyz are from , the Altai and belong to a large family of Altai peoples, to the heirs of the great Altai civilization," the president of  Almazbek Atambayev said at a rally-requiem on the Victory Day.

«One group with the Kyrgyz includes a number of related peoples of the . These are, for example, Tatars, Bashkirs, Khakasses, Tuvinians and others. The very word «Sibir» from the Kyrgyz «Shiber» — a place rich in grass, Baikal — «Baikol» — rich lake, Yenisei -«Enesai» — Mother River. And the was earlier called «Zhayik," «Yaik» — wide.

«Many great citizens of  have distant ancestors from the Altai family of nations. This is clearly shown by their surnames: Karamzin, Aksakov, Turgenev, Yesenin, Ushakov, Kutuzov. Of the modern, I can name such names as Naryshkin, Shoigu, Kara-Murza and others," the head of state said.

It is not for Zatulin and Veller to say that the Kyrgyz are alien to Russia. Rather, it is their ancestors, judging by their surnames, arrived in Russia or from the deserts of Palestine, or from the forests of Europe. Almazbek Atambayev

«And the problem for is not «strangers," not labor migrants from , but some of its writers and politicians who incite xenophobia and ethnic strife within ," the president added.

If the main suspect in the St. Petersburg terrorist act turned out to be an Uzbek from the Kyrgyz city of Osh, don’t blame all Uzbeks and Kyrgyz for this.

«After all, he was a citizen of , like his father. And from 16 years he lived in ! Perhaps it was xenophobia and skinheads that urged him on extremism. Every family has a black sheep. In any nation there are scoundrels and there are heroes. But one shouldn’t judge about the whole nation on Hitler or Chikatilo, Breivik or Tkach," Almazbek Atambayev said.

«For us, Kyrgyz, Russia is our historical homeland. For every Kyrgyz, the words Manas, Altai, Enesai are holy. Our people remember their roots and will always be close to fraternal Russia, including in difficult times for it. As we have already shown during the Great Patriotic War"

«The power of great was and is in the unity of all nations and nationalities inhabiting . And for this it is necessary to fight against any manifestations of racism and xenophobia. And these Russian politicians must learn from the President of the Russian Federation Vladimir Putin," Almazbek Atambayev said.