Kyrgyzstani Eduard Kubatov, who conquered the highest peak on the planet Everest, descended from the upper mountaineering camp and posted a touching post on Facebook. 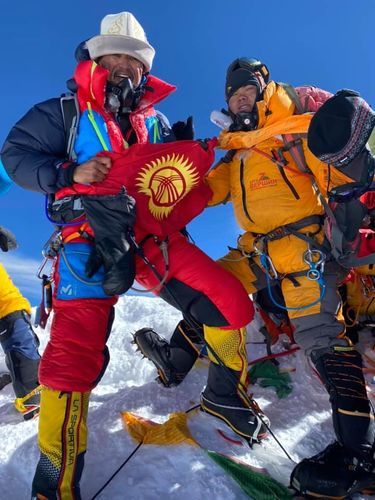 «On May 23, at 8.35 am, I have accomplished the main personal feat in my life. Our flag and Kyrgyz ak kalpak are on Everest for the first time, at the highest point of our Earth! I dedicated my ascent to my dear country! There was a huge number of requests and appeals, but I decided for myself: this is a victory for my country, for my people and land! I gave my all, reached the top through moral and physical exhaustion, but I conquered it, and I knew that my compatriots were waiting for this! I hug everyone, live and fight for you!» he posted.

Eduard Kubatov is 49 years old. He is retired lieutenant colonel of the special services. He is fond of mountaineering. On February 3, 2013, a mountaineering expedition, in which he was part, planted the flag of Kyrgyzstan on Mount Aconcagua in South America.

He is also fond of boxing, the national kok-boru team game and triathlon (participant of the 2017 World Cup in Abu Dhabi).

Eduard Kubatov is the second Kyrgyzstani who managed to conquer Everest. The first was Dmitry Grekov in 1997.