Ban on sale of alcohol in Osh city canceled

A new order that cancels the previous one was posted on social media. The document is dated April 15 and is signed by the Commandant of Osh city and Osh region Malik Nurdinov. 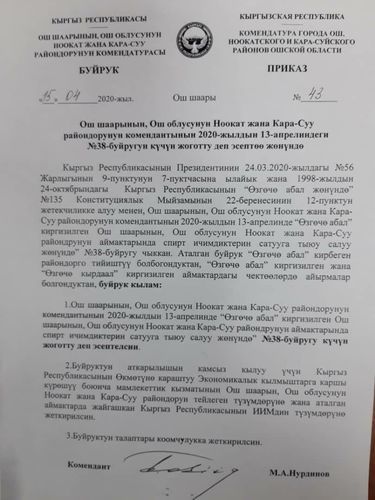 As the press service of the Commandant’s Office of the region explained to 24.kg news agency, the decision to ban sale of alcohol was not canceled, but suspended.

The commandant’s order has not yet entered into force, since it must be agreed with the deputies of the local councils.

«The commandant’s order has not really entered into force. Adoption of such a decision was facilitated not by religion, but by the appeals of residents. Citizens living in the region themselves asked to stop sale of alcohol. People complained that their relatives, after drinking alcohol, leave houses and disappear. Some people, thinking that alcohol will help them not to get coronavirus, began to drink alcohol as a medicine. However, doctors do not recommend drinking during a coronavirus outbreak, since alcohol lowers immunity. In this regard, order was issued temporary banning sale of alcoholic beverages,» the Commandant’s Office told.

Recall, the Commandant’s Office of Nookat, Kara-Suu regions and Osh issued a temporary ban on sale of alcoholic beverages. The commandant asked sellers to take this decision with understanding.

Freedom of speech in Kyrgyzstan is under threat after another coup