Government of Kyrgyzstan set up a working group only to select a consultant to transfer Manas Airport to external management. Cabinet order is available on the website of the Ministry of Justice.

The document notes that the working group is formed to comprehensively consider proposals of international financial institutions on providing financial and technical assistance in preparation and implementation of a public-private partnership project for development and modernization of airports of Manas International Airport Open Joint-Stock Company. Moreover, the result should have been presented within two months.

By the same decree, the Government canceled its decisions on formation of a working group to study the terms of the investment agreement with the Turkish company TAV Airports Holding dated 2017 and creation of Coordination Council for the development of transport and logistics center of Manas International Airport Open Joint Stock Company dated 2014.

It should be noted that none of the document indicates that the airport should be developed according to the public-private partnership scheme. 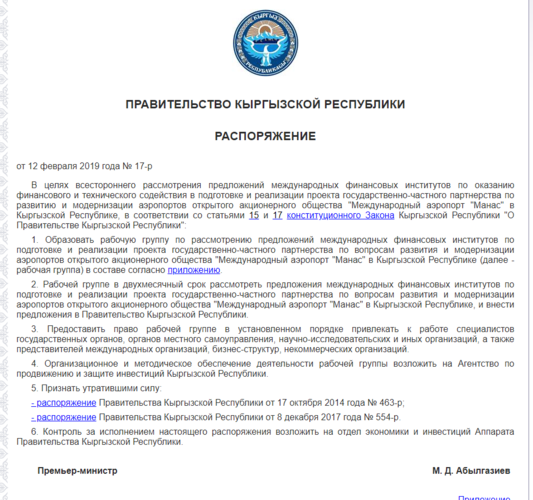 Recall, the idea of ​​the Government to transfer Manas Airport to external management was announced earlier this year. At the same time, benefits of the project have not yet been analyzed. Advisor to the Government in this matter will be the International Finance Corporation (IFC).