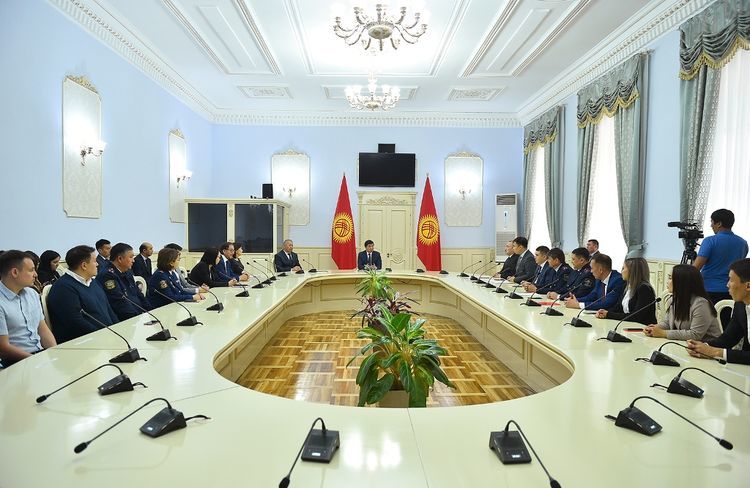 Prime Minister of Kyrgyzstan Mukhammedkaly Abylgaziev awarded state officials for their contribution to implementation of the first phase of Safe City project. The Information Support Department of the Government’s Office reported.

The Head of the Cabinet noted that, despite criticism, they had managed to fulfill the task, the benefits of which are obvious.

«I must say that our position has always been unequivocal — the project is necessary for the society. Its implementation was supported by the president. The tender itself was open and transparent. We can safely say now that the first stage of Safe City was successfully implemented,» said Mukhammedkaly Abylgaziev.

Related news
Shenzhen Sunwin ready to implement second phase of Safe City project
The Prime Minister noted that positive results were observed on the roads of Bishkek and certain sections of the roads in Chui region after the launch of the project.

«The most important achievement is the decrease in traffic accident rate and mortality in traffic accidents. In general, the society reacted positively to the project. A contribution is made to the formation of a driving culture, responsibility and discipline of all road users are increased. There are comments, we already react on them. For example, fines for minor types of violations of the Rules of the Road will be reduced. At the same time, the size of fines for gross violations of traffic rules remains the same,» he said.

Related news
Safe City: Number of traffic accidents decreases by 52 percent in Bishkek
«I would like to express special gratitude to the representatives of the media for the timely and open coverage of the implementation of Safe City project. We are starting the second stage now. As a part of its implementation, it is planned to cover 306 points with 266 hardware and software complexes — 266 stationary and 40 mobile — on the main sections of the country’s strategic roads,» the Head of the Government said.
link: https://24.kg/english/130911/
views: 680
Print
Related
Vehicles impounded in Bishkek for non-payment of traffic fines
About 638 million soms in fines paid within Safe City project
Acceptance of payments for traffic violations suspended
President Jeenbekov tells about success of Safe City project
Installation of video cameras with face recognition function starts in Bishkek
Driver attacks operator of Safe City project in Moskovsky district
Safe City: Cameras to be installed at 44 intersections within 2nd stage
Safe City: Deputies plan to reduce fines for minor violations
Persons involved in damage of Safe City cameras to compensate for losses
Police arrest man who smashed Safe City cameras on August 8
Стоимость акций Центерры на бирже в Торонто (TSX)
на 02.06.2020
USD 10,1

Mosques and other religious institutions not work in Kyrgyzstan yet
News brief
2 June, Tuesday
16:28
Another employee of Health Ministry infected with COVID-19 Another employee of Health Ministry infected with COVI...
16:19
Ex-president of Kyrgyzstan Kurmanbek Bakiyev comments on extradition to Bishkek
15:45
Public transport drivers fined in Bishkek for violation of mask requirement
15:36
Six more Kyrgyzstanis return to Bishkek from India
14:16
Number of infected with coronavirus exceeds 6.2 million people globally
13:57
Two more medical workers contract coronavirus for a day in Kyrgyzstan
13:53
79-year-old woman dies of coronavirus in Naryn region
13:45
179 citizens of Kyrgyzstan return to Bishkek from Minsk
13:39
Residential building burns down at night in Novopavlovka village
13:34
Prosecutors receive 68 torture allegations since beginning of 2020