According to the committee, components for the manufacture of high-power improvised explosive devices, as well as firearms and their ammunition, were found and seized during a search at their place of temporary residence. 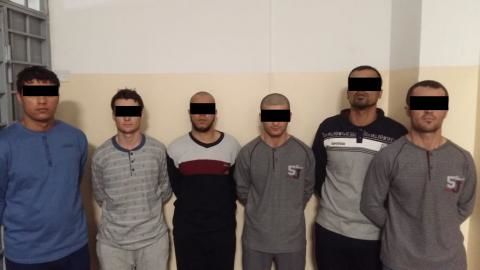 According to the investigation, the detainees acted following the instructions and under the leadership of Daesh militants abroad. According to the same data, it was planned to use explosive devices and carry out a subsequent armed attack in Almaty in places of mass gathering of civilians. Investigative activities continue.

Border conflict: Rally takes place in Batken
News brief
17 January, Friday
17:59
Acceptance of payments for traffic violations suspended Acceptance of payments for traffic violations suspend...
16:58
School student suspected of raping 16-year-old girl in Tokmak
16:27
Aisuluu Tynybekova: I have a mind to make history for my country
16:11
Results of 2019. Economy of Kyrgyzstan continues to depend on gold
15:40
Events in Koi-Tash: What Farid Niyazov is accused of
15:27
Border conflict: Deputy Prime Minister Zhenish Razakov names betrayers
14:57
Power engineers’ case: Consideration of appeals to start at Bishkek City Court
14:50
All Bishkek theaters to go on tour to Russia
14:44
Kyrgyz-Chinese border to be closed for week
14:40
Mukhammedkaly Abylgaziev and Dmitry Medvedev talk over the phone