Atsuto Uchiyama, 30, studied to be ecologist, but became a chef of Italian and Japanese cuisine. He teaches at vocational school 10 in Bishkek now. He told 24.kg news agency what encouraged him to learn the Kyrgyz language and how local Kyrgyz sushi differ from Japanese ones. 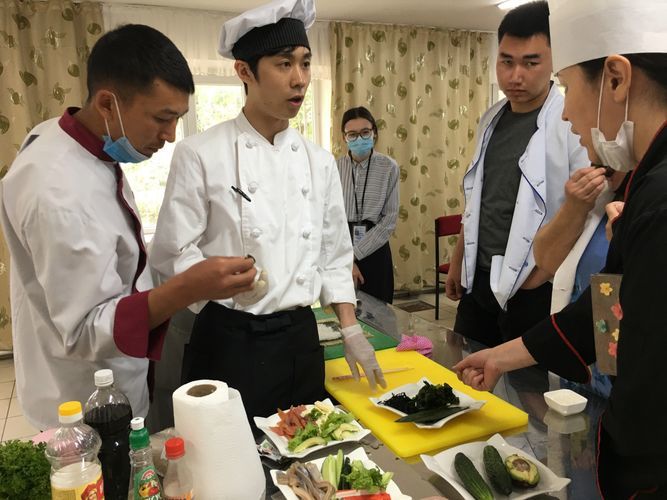 — I am from the city of Yokohama (Kanagawa Prefecture), I studied at the university to become an ecologist, but decided to become a chef because of my great love for cooking. I had worked in a local restaurant for six years, and then decided to participate in a volunteer program.

I first learned about Kyrgyzstan after reading an application of the Japan International Cooperation Agency (JICA), which sends volunteers to different countries of the world.

I was looking for information about the country and found a myth that Japan and Kyrgyzstan have the same ancestry.

I was selected for the program and came to the Kyrgyz Republic in December 2019 as a JICA volunteer, but in March 2020, due to the pandemic, I had to leave Bishkek. We were urgently evacuated. I returned back in May 2021, and I am living in Bishkek. It’s hot in here now. When I first arrived, I it was very cold. I fell ill, had a sore throat, but quickly recovered.

— You speak Kyrgyz language. Was it easy for you to learn it?

— I have learned Kyrgyz for three months in Japan and one month after coming here. Kyrgyz and Japanese are similar, especially grammar, so it wasn’t that hard. Moreover, I had an understanding that I would have to speak Kyrgyz with students and colleagues. I liked this language. Some of our words sound similar. For example, ayabai, which means «very» in Kyrgyz, is similar to the word «yabai», which is popular among young people and means «cool». Historically, the word meant «dangerous.»

— What other foreign languages ​​do you speak?

— I speak English a little, I am learning Russian. It is very complicated. I think this is necessary, because many people in Bishkek speak Russian. I would even say that these two languages ​​are used interchangeably, so you need to know both languages ​​in order to fully understand the speaker.

— How did the knowledge of the state language help you to adapt in Kyrgyzstan?

— When I speak Kyrgyz, people treat me kindly and more attentively. Language is important when shopping and ordering food, as well as learning about the life and culture of a country. When I go to bazaars, sellers ask a lot of questions, since there are few Japanese people in Bishkek. They are interested in my homeland, I try to answer all their questions, and this helps me to practice my language skills.

I gradually got used to the country, visiting my colleagues, bazaars, learning about the life of local residents. My colleagues from the vocational school became my friends. On weekends, we go to the mountains with them, go to the markets.

— Kyrgyzstan is very friendly to the Japanese. There are more kinds of ingredients than I thought before. I was amazed. If I remember my first trip to the store during my first visit, I bought tomatoes, cucumbers, potatoes, beef. The meat, by the way, turned out to be inexpensive. It is very expensive in Japan, especially beef, and there is little lamb. Your national dishes are delicious, and there are a lot of Japanese cars.

I am surprised that some people in Kyrgyzstan do not speak the Kyrgyz language.

People speak Russian very well, and I got the impression that many people speak English.

I had no culture shock, so the impressions were positive and remain so to this day. I have a wonderful family in my neighborhood. We cook and have a dinner together.

— What regions of Kyrgyzstan have you been able to visit during this time? Do you have favorite places?

— I visited Ala-Archa and the mountains. The landscapes are very beautiful. I like that the mountains are close to the city and I can go hiking with ease.

I want to go to Karakol, to Issyk-Kul, to visit Son-Kul. I would also like to visit Osh, I heard that plov is very tasty there.

The habit of taking off the shoes when entering a house, the external similarity of our peoples and a person, who is very similar to my Japanese friend.

There are many sushi cafes, local authentic Japanese cuisine Furusato. People know a lot about Japan, especially about anime, manga, I am glad and want people to be interested in Japan even more.

— These are sushi, tempura, nikujaga and so on. Nikujaga is very similar to kuurdak. In addition, the Japanese eat a lot of fish. Little oil is used in Japanese dishes and fresh food is preferred. In addition to the main course, small ones are served, that is, there are the main course, rice, soup and three small dishes on the table.

— What are the basics of making sushi?

— The main thing is to cook tasty rice, and also not to press it too much when rolling, in order the rice not to become hard.

Japanese and Kyrgyz sushi are slightly different, Japanese ones have more fish, they are smaller in size. But I think that the sushi are very tasty here.

It also seems to me that vinegar sweetened with sugar is not added to rice here, but it is always added in Japan. As for the filling, you can add whatever you like.

— What do you think about the Kyrgyz national cuisine?

— Everything is delicious. A lot of oil is added, but the taste is very good. I especially love lagman, plov and beshbarmak. I don’t know much about kumyz, kurut. I didn’t like it so much, because kumyz has an unusual smell and kurut is too salty for me. I’m very afraid to taste the head of a ram. In general, I think that I like everything.

— Why is it worth returning to Kyrgyzstan again?

— Unfortunately, I cannot visit many places here because of COVID-19, but in the future I would like to return

Related news
Makiko Uehara and Aya Murakami: Japanese and Kyrgyz are similar in appearance
as a tourist and to tell the Japanese about your wonderful country. There are many problems in Bishkek, but people value family, personal time. People work more in Japan, from morning to evening, I would like the Japanese to devote themselves not only to work.

— What is volunteering for you? What did the work in the vocational school give you?

— While studying at the university, I learned about JICA, about developing countries, I wanted to visit them and make my own contribution, so I decided to apply for the volunteer program when the opportunity arose.

Thanks to the vocational school, I learned about the food culture in Kyrgyzstan. Kyrgyz cuisine is little known in Japan, so it is very informative. I also want to visit other countries, study the cuisines of Central Asia.

At the beginning of volunteering, it was difficult for me in terms of language, but my colleagues and the director of the vocational school supported me, they were kind and helpful. I want to keep in touch with them and hope that one day we will be able to cook together again.