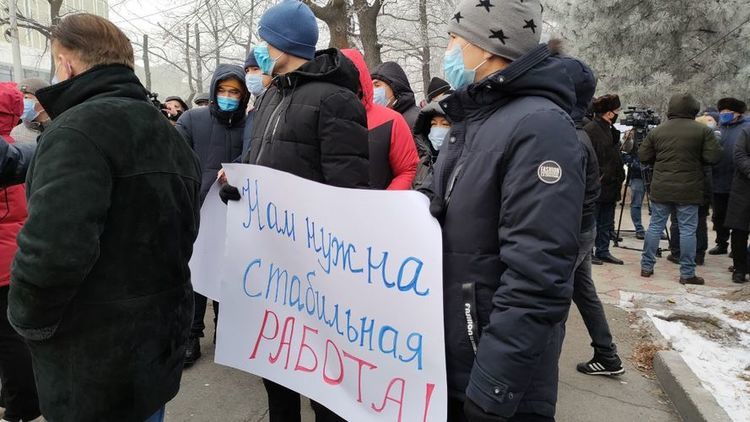 Man in the street of Kyrgyzstan has probably never heard of most of the fields of gold and other minerals, which were frequently mentioned in the domestic mass media in recent months. Unfortunately, the newsworthy events are not the brightest for our mining industry: raiding, damage to property, pressure from the local population, mass layoffs.

About 200 employees of Bozymchak mining complex, located in Jalal-Abad region of Kyrgyzstan, held a rally on Friday, December 11, near the Government House in Bishkek. In total, the company employs about a thousand employees from different regions of the country. They want to be allowed to work and feed their families.

The reason for the shutdown of the enterprise was the requirement of local residents that 80 percent of its employees should be recruited from two nearby villages. The protesters understand that if they are fired, the state will not be able to provide them with jobs. They demand from the authorities to fulfill their basic functions, such as protection of investors.

According to the miners, against the background of protests on October 5-6 after the parliamentary elections, local residents staged riots at Bozymchak mining complex and tried to seize it.

All this is called pressure on the investor, moreover, in a tough and uncompromising way, in order to please a small group of people.

It is also a serious threatening gesture for the entire statehood. The direct path to regionalism begins with the fact that the central government cannot ensure fulfillment of its obligations to the investor. By the way, an investor can be a person from a neighboring region, or a transnational company located on another continent.

The state, however, must ensure that all environmental agreements are respected, the investor pays taxes, salaries and other deductions. For the most part, all large companies comply with these contract clauses.

For some reason, people naively believe that an investor is some silly man. They say, out of their own stupidity and at a loss, they bring people from all over Kyrgyzstan, and often from far abroad countries, to work at the field. What for? When right here, nearby, in the neighboring village, you can recruit those who wish. But maybe large industries need people of a certain specialty, with work experience, adhering to labor discipline?

Damage that may increase

After October 5, the fields of Kyrgyzstan suffered damage in the amount of 1,952 billion soms. In total, 46 criminal cases have been initiated on mining enterprises, and pre-trial proceedings are underway on 29 cases, еhe Deputy Minister of Internal Affairs Erkebek Ashirkhodzhaev stated at a coordination meeting on combating corruption.

Related news
Employees of Bozymchak field hold rally near Government House in Bishkek
It seems that the police are looking for the guilty, but the rally in Bishkek showed that everything is not so good in reality.

Investors from dozens of other fields are probably watching the situation at Bozymchak. They are very interested in how the case will end. Everyone understands that new activists may appear tomorrow at Jerooy, Kumtor, Jamgyr, Terekkan fields (not to confuse with employees and their families!), who want to earn political dividends on the hot topic «make the investor respect our rules» to the detriment of all the agreements reached.

Thousands of employees of these companies are waiting for resolution of the situation. Many of them have loans. Every day they are consumed by the thought: will our field become the next one? Will we have to look for work in another country already tomorrow?

What the republic can lose

Contribution of the mining sector to the republic’s GDP is from 7 to 10 percent, to industrial production — more than 50 percent, export — more than 40 percent. This is tens of billions of soms annually, at the expense of which pensions, salaries are paid, water distribution, transport and energy infrastructure is maintained. The same officials are being maintained at their expense.

Do not forget that, for example, Kumtor mine, along with other gold mining companies (excluding Jerooy, it has already stopped), annually extracts and transfers tens of tons of gold to the state for sale in foreign markets that supports the exchange rate of the som to the U.S. dollar.

Kyrgyzstan exports few goods to foreign markets, and we buy everything, from smartphones to buckwheat and socks.

As soon as the next protesters try to block the roads to the largest gold mining enterprises for at least a month, we can get a rapid drop in the balance of payments. The Kyrgyz som will depreciate further, affecting the prices of food, clothing and other goods. This story is no longer about harmless populism. Every citizen will have to pay for someone else’s political points out of his or her own pocket.