Sadyr Japarov not acquitted by Supreme Court of Kyrgyzstan

Sadyr Japarov, who had appointed himself to the post of the Prime Minister of Kyrgyzstan, was not acquitted by the Supreme Court. The ruling of the country’s highest court dated October 6, 2020 was handed over to 24.kg news agency.

On October 6, 2020, the Supreme Court really considered and granted the petition of the lawyer Sharabedin Toktosunov to review the criminal case against Sadyr Japarov on the basis of newly discovered evidence.

No acquittal was passed to Sadyr Japarov. The Supreme Court ruled to send the case for review, overturning previous decisions. 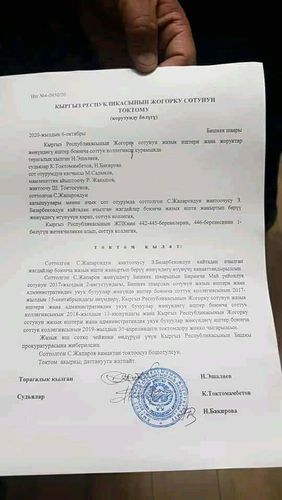 The decision of the highest instance dated October 6, 2020 states that the pre-trial proceedings were sent to the Prosecutor General’s Office.

Japarov, who wants to become the head of the Government, says that he was acquitted by the court that is not true.

Sadyr Japarov was serving his sentence in a prison colony. The courts of all instances sentenced him to 11 years and 6 months in a maximum security prison colony for complicity in organizing a rally in Karakol in 2013. He was convicted under Article 227 «Hostage-taking» of the Criminal Code of the Kyrgyz Republic. He was released after the riots in Bishkek.