UK withdrawal from EU. What effect it will have on Kyrgyzstan? 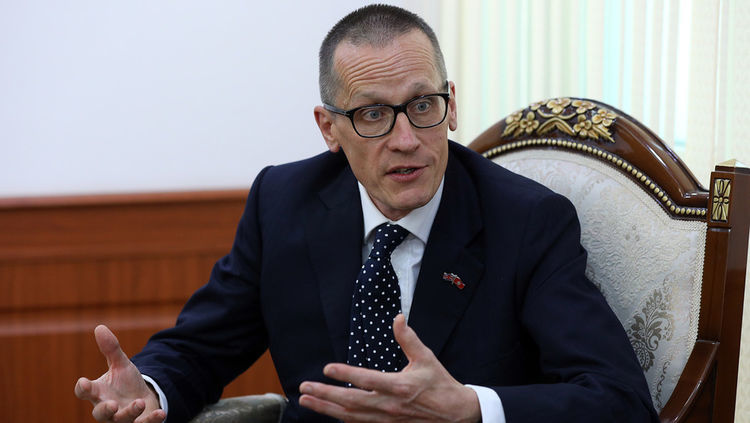 Today, on February 1, 2020, the United Kingdom ceased to be a member of the European Union. In an interview with 24.kg news agency, the British Ambassador to Kyrgyzstan Charles Garrett told how its relationship with Kyrgyzstan would develop after Brexit.

— How will relations between Great Britain and Kyrgyzstan develop? How will withdrawal from the EU influence the work of the Embassy here, in Bishkek?

— We have mutual trust and respect for the aspirations of Kyrgyzstan. This is based both on growing trade and investment ties, and on cooperation in the development of the economy, democracy and other areas. We will continue to develop these ties even after leaving the European Union.

As for the work of the Embassy, ​​from February 1, all statements made by the EU Delegation to the Kyrgyz Republic cannot be regarded as the official position of the United Kingdom. We will stop going to meetings organized by the EU Delegation. But we will continue to cooperate in the framework of new agreements, to be friends with them, to drink tea sometimes.

— What effect will Brexit have on projects that are currently being implemented in Kyrgyzstan at the expense of the EU and the UK? For example, on the work of the Department for International Development (DFID)?

— DFID has been operating in Kyrgyzstan since 1998, there was no Embassy or a EU representative at that time. Our DFID collaboration will remain unchanged.

All joint projects of the UK and the EU, implemented in the Kyrgyz Republic, have always been funded separately, although they supported common goals: development of democracy and the rule of law.

Up to date, DFID has invested over £ 95 million in Kyrgyzstan to support various projects, for example, in the management of water and land resources, which were created to resolve domestic conflicts and create an environment for the economic stability of the regions, to support reforms through provision of expert assessment and various studies.

— Earlier, the Government of Kyrgyzstan announced that it was ready to conclude a new bilateral cooperation agreement with the United Kingdom after Brexit. How is the work going?

— Will there be any easing of visa regime for Kyrgyzstan after Brexit?

— Easing of the visa regime for neither Kyrgyzstan, nor any other country can be considered within the framework of Brexit. Entry into the UK has always required a British visa — this is a matter of national security.

— The EU gave Kyrgyzstan the GSP + status, which gives the right to duty-free import of more than 6,000 items of goods into Europe. Will this agreement cease to be in force after Brexit in Great Britain?

— Throughout 2020, all EU agreements with Kyrgyzstan, which include cooperation with the UK, will remain in force. The GSP + system will be in force until the end of 2020. As for the next steps, I think it will become clear later this year.

But I am sure that we will try to keep certain preferences, especially in the context of the fact that the UK is a leader in trade relations with the Kyrgyz Republic among the EU countries.

— Great Britain is among the top five largest exporters of Kyrgyzstan. Will the withdrawal from the EU affect the turnover between our countries?

— Not, it will not. Most of the UK’s trade with Kyrgyzstan is based on the purchase of gold from Kyrgyzstan. Moreover, we strive to diversify and increase trade and economic relations between our countries.