The State Registration Service of Kyrgyzstan started issue of a new type of driver’s licenses. Press service of the state agency reported.

It is specified that applications for obtaining and replacement of driver’s licenses of a new type will be accepted at the territorial divisions of Unaa state institution.

Old-type driver’s licenses will be valid until their expiration date. They can only be replaced on a voluntary basis.

Temporary driver’s licenses issued from June 10, 2019 with a validity period until December 31, 2019 are subject to mandatory replacement.

The state service noted that the new type of driver’s licenses has an improved design, it is characterized by high quality of the material itself (polycarbonate); personal data and photograph, unlike the existing ones, will be applied by a laser printer, which does not allow the photo and text to fade throughout the validity period, that is 10 years. In total, the form has more than 20 security elements. A sample of the new driver’s license is shown on the photo. 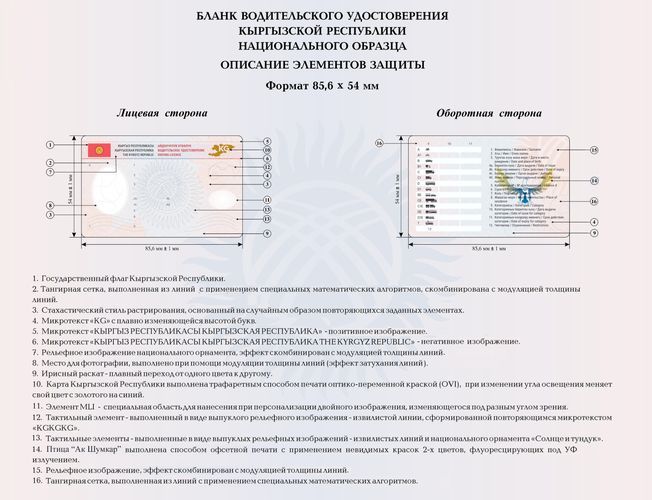 «The purchase price of the forms compared to the previous one was reduced almost nine times and was set at 100.86 soms. Over the past eight years, they had been purchased at a price of €12 (at an average exchange rate — 920 soms),» the State Registration Service informed.

The purchase price of the forms of new driver’s licenses, in contrast to the previous contract, is fixed in the national currency, and not in euros, as it was before. This eliminates the possibility of price increases due to exchange rate fluctuations.

Foreign Ministers of Tajikistan and Kyrgyzstan hold talks in China