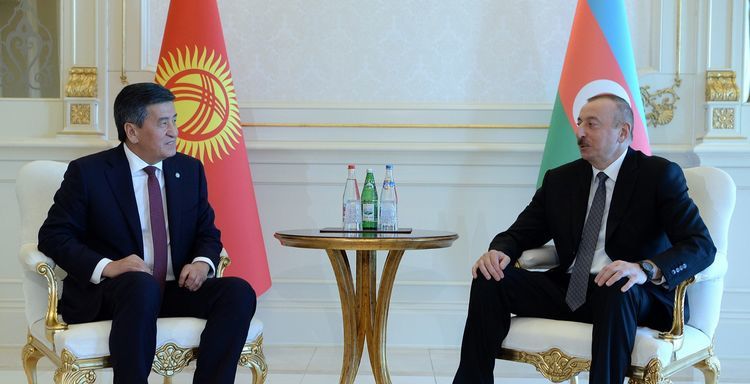 President of Kyrgyzstan Sooronbai Jeenbekov invited his Azerbaijani counterpart Ilham Aliyev to pay an official visit to Kyrgyzstan. Press service of the head of state reported.

Ilham Aliyev reportedly plans to make an official visit to Bishkek in the second half of 2020.

The day before, the President of the Kyrgyz Republic also discussed prospects of bilateral cooperation with his colleague in Baku. The meeting took place as a part of the 7th meeting of the Cooperation Council of Turkic Speaking States.

Prospects for development of bilateral cooperation were discussed, including strengthening of trade, economic, cultural and humanitarian ties between the countries.

Ilham Aliyev noted that there was a good opportunity to discuss the prospects of bilateral relations. He emphasized that a wide range of issues was discussed during the last year’s summit of the Council in Cholpon-Ata town.

«We continue our dialogue today. I am sure that we will discuss issues of further cooperation in the political, economic, humanitarian and other fields,» said Ilham Aliyev.

He stressed that Kyrgyzstan has been a brotherly country, friend and partner of Azerbaijan. He expressed confidence that relations between the countries would be strengthening from year to year.

Ilham Aliyev thanked Sooronbai Jeenbekov for effective chairmanship of the Kyrgyz Republic in the Turkic Council.

Sooronbai Jeenbekov noted that the summit in Baku was an anniversary and historical. He noted the success of the meeting of the Intergovernmental Kyrgyz-Azerbaijani Commission on Economic and Humanitarian Cooperation, which was held in Bishkek.

According to him, Azerbaijan is also a brotherly and friendly country for Kyrgyzstan, importance is attached to the development of bilateral relations with the Azerbaijani side.

«We have been always striving for our relations to develop confidently and actively on mutually beneficial conditions,» the President of the Kyrgyz Republic stressed.