Russian Platinum won a license for development of Jerooy deposit in May 2015. The day before, journalists were shown how the field has changed for two years, and told why the first gold should be expected only by the end of 2019.

Russian Platinum won the competition for Jerooy thanks to the best technical and economic proposals, as well as the offer for a license of $ 100 million (which it paid in June 2015) and the obligation to remove from Kyrgyzstan the court claims for $ 580 million (the problem was resolved in August of the same year).

Since then, almost nothing has been heard about the activities at the deposit. But in fact, the subsidiary Alliance Altyn has already completed a tremendous amount of work. This is despite the fact that the promises of the government concerning the work at the field remained only on paper. 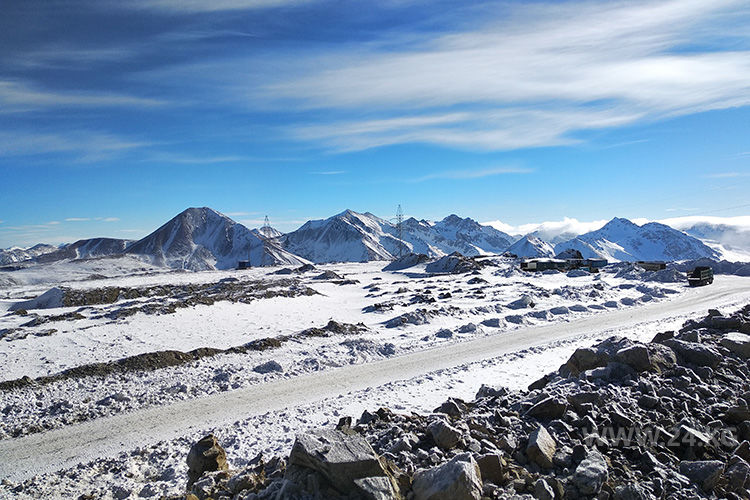 The field area is 1,300 hectares. One of the main expenditure items there is road construction. Today, the construction and reconstruction of roads is almost completed at the site. New mountain roads became wide and smooth. At least $ 15 million was spent only on their construction in a year and a half. About 50 kilometers of roads have been reconstructed and built at the expense of the money.

Even at the construction stage, the company brought good money to the budget. For 2015-2018, the volume of payments to the budget and the Social Fund amounted to 503.4 million soms. In addition, Bakubat Talas fund was financed for 300 million soms.

There is an important detail. All construction work at the deposit is carried out by contractors only. Such is the principled position of Alliance Altyn. As of today, 18 contractors work at the site. And only one of them is foreign. AAE Kazakhstani company is engaged in the construction of a gold mining plant and a tailing dump. The majority of employees of the company are the citizens of Kyrgyzstan. The project engineer is WorleyParsons Company.

It is planned to put the pit into operation in August 2019. We are about 6 months behind the ore mining schedule, and as for the processing plant — 8 months.

«First of all, it is connected with the repeal of the government resolution on stage-by-stage design and construction. It was canceled at the end of 2016. All 2017 and 2018 years long, we are negotiating, ask to adopt the resolution. This hinders not only us, but also other industrial enterprises that cannot start construction until the design and all examinations are completed,» Mikhail Shubin told.

«There were problems with land. Despite the fact that during the competition the state promised a company-winner land, in fact, we had to buy it from Kyrgyzaltyn. The same story was with energy. Only in October 2017, we signed the last electricity supply agreement with the National Electricity Network. Its representatives are finishing the reconstruction at Chat Bazar substation and are committed to connecting us in February 2019,» said Mikhail Shubin.

At the same time, the equipment for Chat Bazar was purchased using Alliance Altyn funds.

And these are only the largest problems. There were smaller ones, which ultimately lead to the delay in the construction of facilities and launch of the deposit. It is interesting that the company does not make claims. It only says that they understand where such close attention comes from.

«It’s difficult to sign such a project. It has a great social and economic significance. Therefore, representatives of government agencies are carefully and thoroughly studying in order not to make any mistakes. Despite the difficulties, we will not depart from the original technical design. Everything will be done as it was promised initially,» Mikhail Shubin summed up.

Infrastructure construction at Jerooy is 65–70 percent complete. By the spring of 2019, all work will be completed. However, the launch of the gold processing plant is planned only for October-November 2019. The first Dore bars are planned to be produced at Jerooy at this time, which will be refined at Kyrgyzaltyn plant.

It is planned that the service life of Jerooy deposit will be 25 years.The total volume of ore, according to preliminary estimates, is 21 million tons, and the proved and probable gold reserves are 2.68 million ounces. If market conditions allow, the company will mine 92.5 tons of reserves (including part of the off-balance). The maximum gold production at the mine after the launch of the plant may be up to 4-5 tons per year, because the plant will process about 1.3 million tons of ore annually.