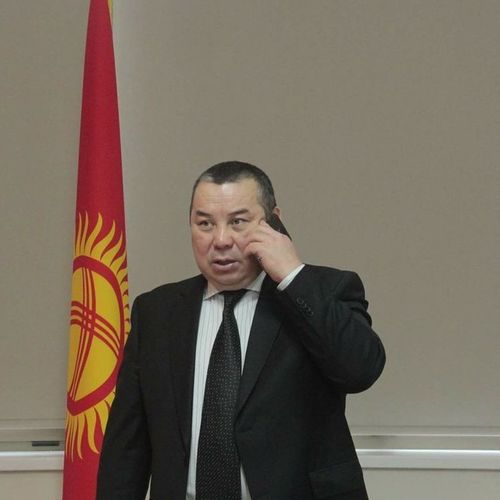 Today, the Prime Minister of Kyrgyzstan Mukhammedkaly Abylgaziev introduced the newly elected head of the capital Aziz Surakmatov to the staff of the Bishkek City Administration. The new mayor decided to resolve personnel questions at once. As it became known to 24.kg news agency, Aziz Surakmatov offered the post of the head of staff of the Bishkek City Administration to the vice president of Ayu Holding Balbak Tulobaev.

Balbak Tulobaev will turn 46 on September 21. He was born in Kol-Tor village of Ton district in a teacher’s family.

After graduation from school, Balbak Tulobaev went to work at Toguz-Bulak collective farm as a worker.

In 1990, he entered the Veterinary Faculty of the Kyrgyz Agricultural Institute named after K. Scriabin. However, he did not finish his study. In 1992, he started studying at the Forestry Faculty at the Istanbul University (Turkey).

After graduation from the Turkish university in 1996, Balbak Tulobaev worked for the Franco-Turkish insurance company Koris International.

2001 — study at the Agroecology Department at the Kyrgyz Agrarian University named after K. Skryabin, received a bachelor’s degree in environmental engineering.

2000-2004 — Senior Consultant in the Committee for the Development of Industry and Business of the Parliament.

2004-2010 — work in the Office of the President of the Kyrgyz Republic at the post of an adviser, assistant, department head, deputy manager, first deputy manager of the president’s affairs.

2009 — study at the Academy of Management under the President of the Kyrgyz Republic, Management Department, bachelor’s degree.

From 2013 to the present — an adviser, a member of the board of directors, deputy president of Ayu Holding Company.

Balbak Tulobaev is also a Chairman of the political party Future of Kyrgyzstan.