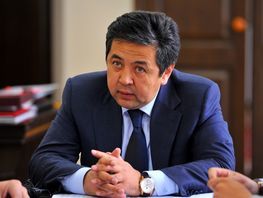 The main supervising body reportedly sent to the Prime Minister Sooronbay Jeenbekov a recommendation to raise a question of dismissal of the Chairman of the State Registration Service Taiyrbek Sarpashev.

The reason for the prosecutor’s response was the SRS chairman’s written order to Bishkek State Registration Office on the execution of a decision by Interdistrict court of Bishkek dated June 25, 2014 on the abolition of the arrest of a property, located at the address: Bishkek city, , .

Therewith, SRS had official notification from Bishkek prosecutor’s office on appealing against the decision and considering it under cassational procedure.

In addition, when the order was sent by Taiyrbek Sarpashev, decision of Interdistrict court of Bishkek dated June 25, 2014 was suspended by the decision of the Bishkek City Court dated November 2, 2016.

The said real property, which was arrested by the prosecuting authorities, belonged to Ulyana Pak, trustee of Maxim Bakiyev.

The above mentioned violations were committed as a result of improper performance of duties by the Chairman of SRS Taiyrbek Sarpashev.

«Being aware that the issues of the search and confiscation of property of Maxim Bakiyev and his associates are under close public and state scrutiny, on November 30, 2016 Sarpashev sent direct written order to Bishkek State Registration Office," the Prosecutor General’s Office noted.

Thus, he committed an offense under Article 14 of the Law «On Combating Corruption», which is expressed in the provision of undue preference to natural and legal persons in preparing and making decisions that affect the interests of these persons.