Chairman of the Intergovernmental Commission on Delimitation and Demarcation of some sections of the state border, head of the State Committee for National Security of Kyrgyzstan Kamchybek Tashiev met with participants of an indefinite rally opposing transfer of Kempir-Abad reservoir to Uzbekistan in Uzgen district.

Kamchybek Tashiev said that the authorities could not ignore the demands of the people. 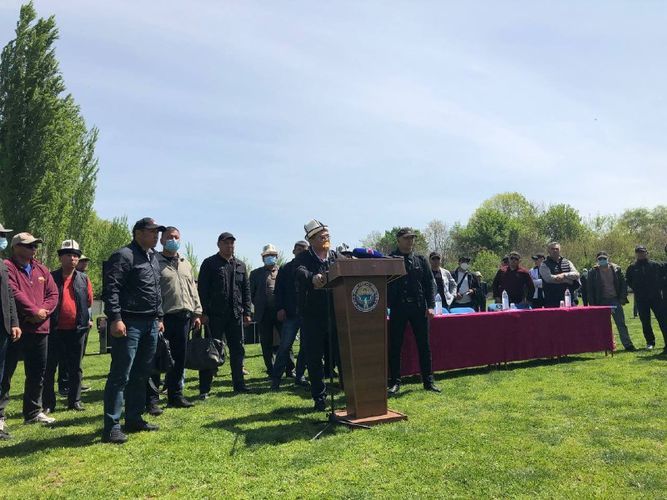 «We did not fall from the sky. The demand of the people is the highest demand for us. You ask not to cede Kempir-Abad, it means we will not cede it,» the head of the State Committee for National Security said.

He asked to stop the protest and disperse.

According to him, since the Kyrgyzstanis are against transfer of some plots, including plots near Kempir-Abad reservoir, they will not be transferred.

Earlier, residents of Yntymak village expressed dissatisfaction with the terms of land exchange. They are against transfer of 50 hectares of land to Uzbekistan.

According to the latest protocol signed in Tashkent, 50 hectares in Kara-Suu district is transferred to Uzbekistan by exchange. According to Kamchybek Tashiev, Uzbekistan asks for this land plot in order to ensure safety of the reservoir.

After meetings with the local population, the head of the State Committee for National Security also promised to once again negotiate with Uzbekistan over this land. «Uzbekistan has already fenced 20 out of 50 hectares. I will go to Tashkent soon. In order not to violate the signed protocol, I will try to persuade them,» he said.

Construction of houses for families of killed in conflict starts in Batken
News brief
12 May, Wednesday
14:27
Kyrgyzstan lacks about 1,000 family doctors Kyrgyzstan lacks about 1,000 family doctors
14:13
Electronic patient records to appear in Kyrgyzstan by end of 2021
13:58
Mudflow sweeps away and kills eight-year-old boy in Uzgen district
13:46
Nationalization of Kumtor: Parliament to hold extraordinary session
13:34
China to provide Kyrgyzstan with COVID-19 vaccines, $ 54 million grant
12:11
Glacier epic: How not to freeze economy of Kyrgyzstan
10:30
COVID-19: Residents of what countries can arrive in Kyrgyzstan
10:21
Global slowdown in grain price growth eases pressure on prices in Kyrgyzstan
09:59
Cabinet of Ministers suggests own variant of protection of entrepreneurs
09:46
COVID-19: Group of doctors from Germany arrives in Bishkek