Single-person protest against amendments to Constitution held at OSCE office

Civil activist Ondurush Toktonasyrov held a single-person protest against amendments to the Constitution outside the office of the Organization for Security and Cooperation in Europe (OSCE) in Bishkek. The human rights activist told about it on his Facebook page.

According to him, he came out with a request to influence the country’s authorities.

«Where is the draft of the new Constitution? Why isn’t it being submitted for public discussion? I put forward a demand to the OSCE office to pay attention to this, so that they bring the draft up for international discussion, in order them to exert moral pressure on the illegitimate Parliament and the authorities,» the activist said. 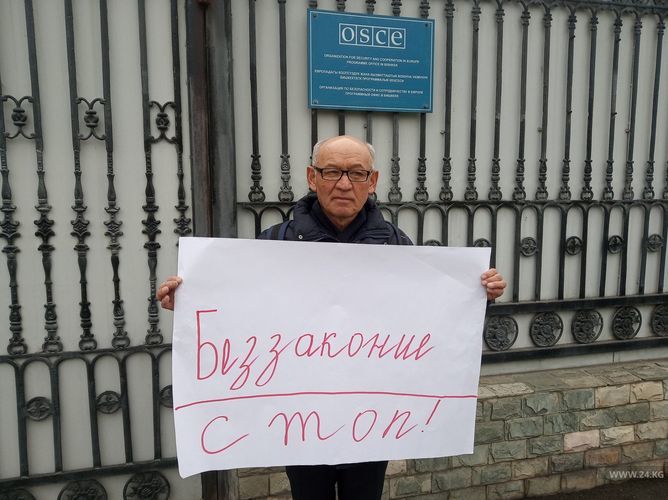 The new version of the Basic Law, according to the press service of the Parliament, has already passed a linguistic examination. The draft will be posted on the parliament’s website one of these days. Further, the people’s deputies must approve the law on holding a referendum on adoption of the Basic Law. According to preliminary data, it will be held together with the local elections, on April 11.

Earlier, MP Akylbek Japarov told reporters that there would be no public discussion, since it had already been held within the framework of the Constitutional Convention.

Revision of the Constitution was originally initiated by Sadyr Japarov. He spoke about this many times. However, the attempt to rewrite the Basic Law was shifted to the deputies of Parliament of the sixth convocation, who, in fact, became illegitimate after October 28, 2020 — their term of office has expired.