President of Kyrgyzstan Sooronbai Jeenbekov visited a day patient center in Bishkek, which was opened to provide citizens with primary health care. Press service of the President reported.

Munarkan Omuralieva, Director of the Joint Family Medicine Center of the Pervomaisky district of the capital, told about the procedure of receiving citizens and providing them with primary care. She told that a pharmacy is functioning at the facility for convenience of patients.

According to her, all the shortcomings that were noticed at the beginning of the activities of day patient facilities have been studied, and she expressed confidence that the disease would be defeated in the near future. Munarkan Omuralieva informed that the doctors are provided with everything necessary, including personal protective equipment.

During a conversation with the staff, Sooronbai Jeenbekov noted the timeliness of opening the day patient facilities in the city, since the citizens, being left without attention, were alarmed by the lack of consultations and first aid.

«The day patient centers are, of course, temporary facilities, they will exist depending on the further situation. The current one shows what danger the public health is exposed to. The lack of a comprehensive modern clinic is especially acute. We will build a comprehensive hospital in Bishkek that will provide all medical services. There are investors who are interested in investing in construction of a modern clinic based on public-private partnership. The same modern hospitals will be built in all regional centers,» he promised. 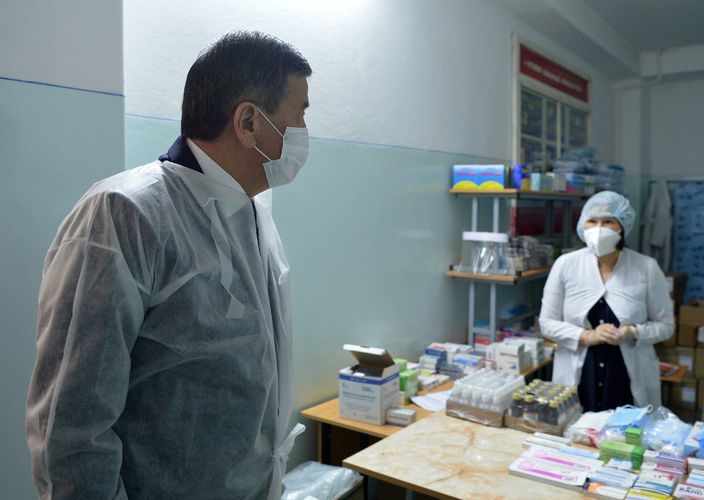 The head of state noted that problems in the healthcare system are known to everyone, the issue of the state of the industry was being prepared for consideration by the Security Council. In connection with the current situation, its consideration was postponed for an indefinite time. He added that under any circumstances, digitalization of the healthcare system would not stop and was under his personal control.

Sooronbai Jeenbekov thanked the doctors for their dedicated work.

«I, like all citizens of our country, believe in the professionalism and dedication of our doctors. Despite the threat to your health, you continue to work for the sake of the health of your compatriots. There is no fatigue and fear in your eyes, I see kindness and confidence, a desire to help people. It inspires me. I’m sure that we will cope with all the difficulties together,» the president stressed.
link: https://24.kg/english/158794/
views: 541
Print
Related
Sooronbai Jeenbekov promises to annually increase volume of soft loans
Number of infected with coronavirus exceeds 18.1 million people globally
25 more medical workers diagnosed with COVID-19 in Kyrgyzstan
Seven more people die from COVID-19, pneumonia in Kyrgyzstan
412 new cases of COVID-19, pneumonia registered in Kyrgyzstan, 37,541 in total
816 people recover from COVID-19, pneumonia for a day in Kyrgyzstan
At least 150 soms spent on meals for COVID-19 patients daily in Kyrgyzstan
President Jeenbekov gets acquainted with state of hospitals in Issyk-Kul region
COVID-19 is not transmitted through breast milk
101-year-old patient recovers from COVID-19 in Kyrgyzstan
Стоимость акций Центерры на бирже в Торонто (TSX)
на 04.08.2020
USD 12,53