Asylbek Kadraliev, leader of Respublika-Ata Jurt party faction of the Bishkek City Council, sent a request to the Chairman of the BCC, Zhanybek Abirov, to remove from the agenda issues, regarding expressing a vote of non-confidence in the capital’s mayor Aziz Surakmatov and allocation of a land plot for construction of a football center. Office of the Bishkek City Council told 24.kg news agency. 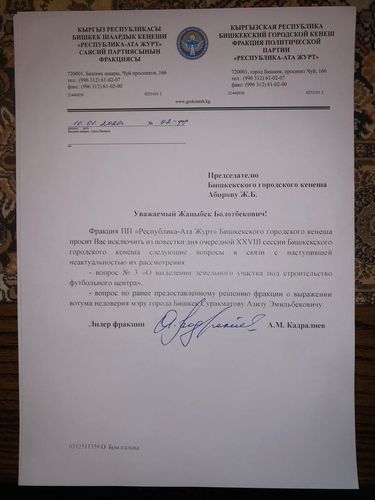 Recall, Asylbek Kadraliev, together with deputies from the faction, actually arranged sabotage of the next session of the Bishkek City Council, when the issue of the football center was discussed.

Moreover, members of the faction he headed decided to cover their lobby with the name of the country’s president.

Asylbek Kadraliev stated at the session that they want to express a vote of non-confidence in the mayor of Bishkek for failure to fulfill the instructions of the President of the Kyrgyz Republic Sooronbai Jeenbekov, decisions of the majority coalition, fractions and commissions of the BCC and sabotage of the social project.

The Football Federation of Kyrgyzstan asked the Bishkek City Administration to allocate land for construction of the center with a complex of sports facilities. The Federation allegedly attracts funds for construction — about $ 8-10 million. The organization stated that the grant would expire on December 31, 2019 and would be transferred to other states that have submitted the application.

The municipality invited the Football Federation to consider options for construction of the center on the basis of Labor Reserves stadium or on other land plots that would correspond to city planning documents, the General Plan and the Detailed Plan Project. However, the Football Federation and the BCC deputies, lobbying for its interests, refused proposals from the City Administration.

It was later revealed that FIFA did not dictate such conditions.

The program on FIFA website contains a common framework program for all the countries — members of the International Football Federation. It describes general rules and principles. There are no guarantees for a grant for infrastructure. Each application is considered separately. There are no requirements for the size of a land plot, its location, and indeed, no requirements for the project itself.