Users of social networks have spread a document, which specifies the details of a criminal case, the defendant in which is the former head of the Presidential Administration of Kyrgyzstan Farid Niyazov.

The order to form an investigative-operational group states that Maksat Chegirtkeev applied to the police on March 20. He asked to bring the Chairman of the State Commission for Coordination of Social Support of relatives of the killed and injured on April 6-7, 2010 Farid Niyazov and its other members to criminal responsibility.

They, according to the document, in 2017, abusing their official powers, despite the doctors’ conclusion about the need for treatment in Sochi, denied his application and withdrew 200,000 soms from the account of the Ministry of Health transferred there for his treatment.

«The statement was registered, and the material was sent to the Prosecutor General’s Office. On March 20, the main supervisory body registered the statement under the article «Use by an official of official position contrary to the interests of the service.» The materials were handed over to the investigative service of the Ministry of Internal Affairs,» the document states. 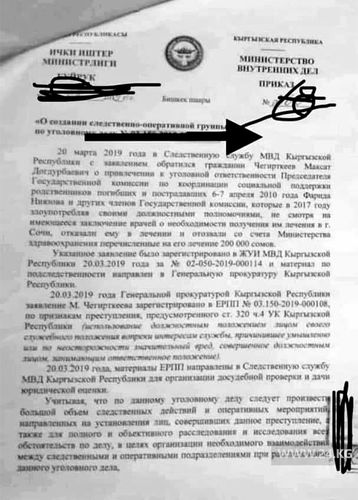 The Prosecutor General’s Office confirmed the information about the criminal case to 24.kg news agency.

«The material was registered based on a statement from a citizen Maksat Chegirtkeev. The criminal case was sent to the Ministry of Internal Affairs for investigation,» the supervisory agency said.