Former chief of staff of the President Farid Niyazov was remanded in Bishkek pre-trial detention center 1 until August 10. A lawyer Zamir Zhooshev reported.

According to him, the decision was made today by the Bishkek City Court. The judges granted the request of the Prosecutor General’s Office.

«It said that it was necessary to interrogate the leaders of the political parties who participated in the rally on October 9, so Farid Niyazov should be held in the pre-trial detention center. But according to the law, this is not possible,» the lawyer said.

Rallies were held in protest against voting results of the parliamentary elections on October 5-6, 2020 in Kyrgyzstan. Then riots broke out. On October 6, the CEC was forced to annul the voting results, invalidating them. A number of arrested politicians were released from the prison colonies.

On October 9, Almazbek Atambayev, his supporters, Omurbek Babanov and others announced another rally. A scuffle broke out on the square between supporters of Sadyr Japarov and the former president of the country.

Later, the State Committee for National Security and the Ministry of Internal Affairs detained many of them, including Almazbek Atambayev, activist Temirlan Sultanbekov, ex-chief of staff of the head of state Farid Niyazov, former employee of the Ninth Service of the State Committee for National Security Kanat Sagymbaev, ex-Deputy Minister of Internal Affairs Kursan Asanov. Some of them are still in custody to this day. Measure of restraint for some of them was changed to house arrest. 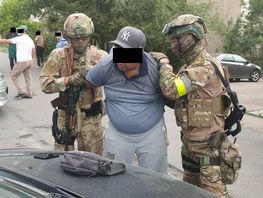