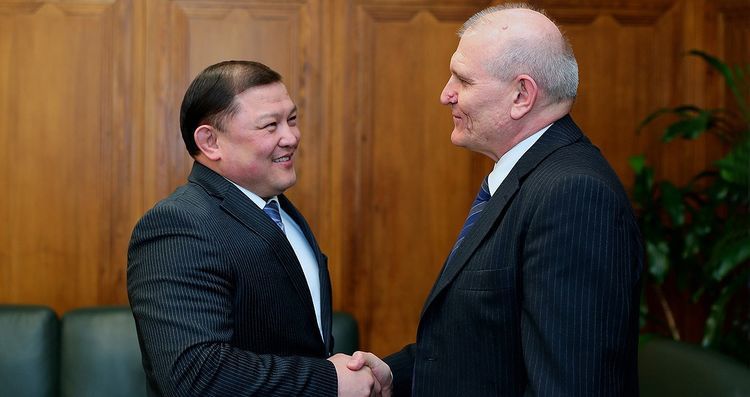 Speaker of the Parliament of Kyrgyzstan Dastanbek Dzhumabekov received the new Ambassador of the Russian Federation in Kyrgyzstan Nikolay Udovichenko.

During the meeting, the parties discussed the state of political and economic cooperation. Dastanbek Dzhumabekov stressed that Kyrgyzstan attached particular importance to the development of bilateral relations with Russia in all areas. The speaker noted the high degree of trust between the two countries established in recent years, as evidenced by the planned state visit of the Russian President Vladimir Putin to Kyrgyzstan.

Speaker and the head of the diplomatic mission of Russia also discussed inter-parliamentary cooperation.

Related news
What Vladimir Putin plans during visit to Kyrgyzstan
The parties noted the need to increase cooperation in the trade and economic sphere. The speaker thanked the Russian side for the material and technical assistance provided in the framework of the accession of Kyrgyzstan to the Eurasian Economic Union.

They talked about the latest events in Yakutia. Dastanbek Dzhumabekov stressed that the Kyrgyz authorities regretted what had happened, and asked to ensure security of Kyrgyzstanis in the Republic of Sakha (Yakutia).

The Russian Ambassador Nikolay Udovichenko added that in his diplomatic activity he would focus on development of cooperation in all areas.

He noted that a number of important events were planned as part of Vladimir Putin’s state visit, including the Interregional Conference; business forum with signing of a number of agreements in the trade, economic and investment fields, as well as the rectors’ forum, which will be attended by rectors of large Russian universities, and a youth forum.

«We are interested in expanding cooperation in all areas with Kyrgyzstan,» said Nikolay Udovichenko.

Sooronbai Jeenbekov expresses condolences to President of Pakistan
News brief
26 May, Tuesday
18:21
At least 393 citizens return to Kyrgyzstan from Moscow At least 393 citizens return to Kyrgyzstan from Moscow...
17:58
Planned immunization resumed in Kyrgyzstan
17:42
At least 717 people get measles in Kyrgyzstan since beginning of 2020
17:30
Medicine used in treatment of coronavirus produced in Kyrgyzstan
17:00
Campaign for issue of passports to prisoners resumed in Kyrgyzstan
16:15
Two more COVID-19 cases detected at Children's Department of Oncology Center
15:48
Parliament of Kyrgyzstan has new deputy
15:34
Graduates of Kyrgyz schools to be able to enter universities remotely
15:11
COVID confirmed in patient of Maxillofacial Surgery Department after discharge
13:52
Motorcyclist killed in collision with two cars in Bishkek