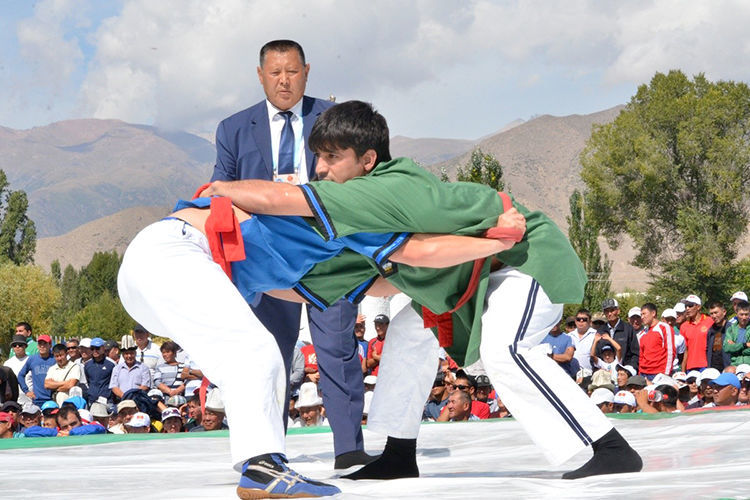 The innovation of the 3rd World Nomad Games will be the Great Struggle of the Nomads and the Book of Winners of WNG. A specialist of the Secretariat of the Games Belek Usenbekov told 24.kg news agency.

The sports program of the World Nomad Games is divided into two parts: sports — competitions in 37 sports, including in the Great Struggle of the Nomads, and demonstrative one.

«In the latter, participating countries will be able to present their games, customs and traditions of sports nature to the whole world and thus contribute to the preservation of the nomads’ culture. One of the goals of the World Nomad Games is the revival, development and preservation of national culture and traditional sports,» he said.

The Great Struggle of the Nomads is a free, unified belt wrestling.

Belt wrestling is one of the oldest forms of wrestling typical to many nomad peoples.

The World Struggle of the Nomads has unified collective rules from all national sports — Kyrgyz kuresh and alysh were taken as the basis.

We had a task of creating such kind of wrestling in which the rules would be as clear as possible to the audience, who are not experts, and also to the athletes.

To win it is necessary to throw an opponent to the ground — by any throw, not necessarily on the back, and this is already a victory.

Winners of national wrestling competitions in their countries — representatives of Japan, Russia, Iran, Azerbaijan, Turkey, Tajikistan, Uzbekistan, Turkmenistan and others — will compete for the victory at the Games. There are 13 of them in the Games program. Kyrgyzstan will compete in its two kinds. 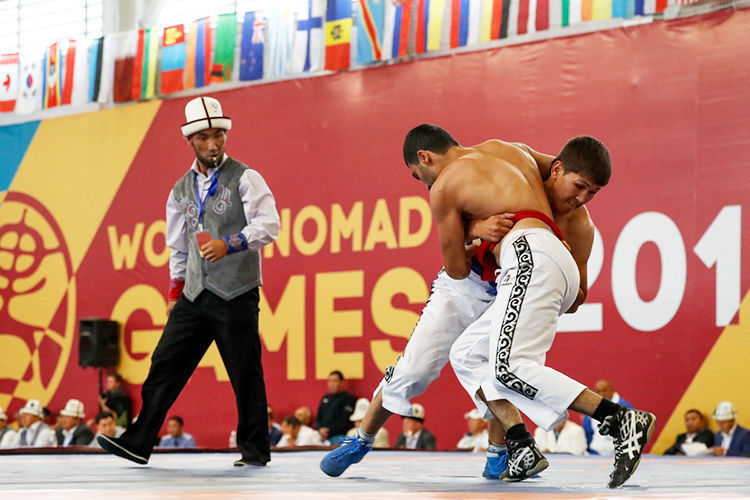 «Every kind of wrestling has a different number of weight categories, but when such games were held in antiquity, there was no weighing scales. Old and young people went out to fight. Now this is called the absolute weight category, where weight is not taken into account. We are trying to preserve this historical format, so the winners in the absolute weight category of these 13 sports will take part in the Great Struggle of the Nomads. Historically, the second or third place was not determined, there was only a winner. And there will be only one winner at WNG, and all the others will be equal,» he said.

This struggle will take place among the strongest. That is why it is called the Great Struggle of the Nomads.

Chronicle of the Nomad Games

The winner of these competitions will be declared the Great Wrestler, his name will be entered in gold letters in the stylized book of the Great Winners of the World Nomad Games.

«We wanted to create some kind of distinctive symbol of the Games. We consulted with experts in the field of history and came to a decision to establish a large book. It will be made of leather according to a special design. The logo of the Games will be located outside, there may be inserts of gold and silver to stress its value,» said Belek Usenbekov.

It is planned to record all the results in the book, as well as information about holding the Games. Perhaps, the data about the winners and participants of the 1st and the 2nd Games will be included into it.

«We will write down the names of the greatest champions, the fastest, the most dexterous, the most accurate, the cleverest, so that they will always remain in history,» he said.

We think that the book will be handed over as a special ritual from games to games.

According to him, after the Games, the Book of winners will be placed in a museum and demonstrated at the exhibitions and to foreign delegations.

The sketches of the book are still kept secret.