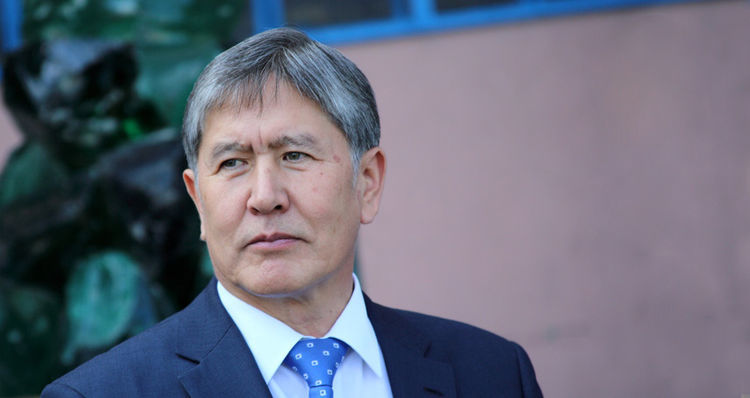 The former President of Kyrgyzstan Almazbek Atambayev broke the silence and made a political statement today.

24.kg news agency publishes the text of the statement.

"Yesterday's decision to take into custody the former prime minister of the Kyrgyz Republic, SDPK deputy chairman, Sapar Isakov, and the former chairman of the State Customs Service, a member of the Political Council of our party, Kubanychbek Kulmatov, is not a fight against corruption. Contrary to common sense, the people, who had distinguished themselves in the fight against corruption, were arrested on corruption charges. The government of Sapar Isakov for 4 months of this year provided a budget surplus of 5 billion soms. This indicator was achieved for the first time in the history of independent Kyrgyzstan. And the key role here was played by the receipts from the customs bodies, which Sapar Isakov and Kubanychbek Kulmatov began to clear from corrupt officials," the text says.

The decision to arrest statesmen, who clearly demonstrated the extent of theft at customs, is in fact the revenge of the friends and patrons of the well-known Raim-millionaire, after the dismissal of which, positive changes and a sharp increase in customs payments became possible.

"I also officially declare that neither the then head of the presidential administration department, Sapar Isakov, nor Kubanychbek Kulmatov, when he was the mayor of Bishkek, were empowered to independently make the decisions that were the basis of the charges brought against them by the investigation. Despite their absurdity, I have so far refrained from public statements in order to enable law enforcement bodies to independently understand the matter. However, today I see that they were tasked with arrest of Isakov and Kulmatov under any pretext," the statement of Almazbek Atambayev says.

According to him, all the strategic decisions on the reconstruction of the Bishkek Heating and Power Plant at the expense of the PRC's credit, including the agreement to choose the contractor by the Chinese side, as well as the decision to redirect foreign grant funds for construction of a school in Kalys Ordo residential area were taken by him, that is, Almazbek Atambayev , as the head of state and by the government after extensive discussions with the heads of relevant state bodies.

"The key role of the president of the country in making such decisions is conditioned by the existing deficit of responsibility of state bodies and employees, the duties of the head of state in foreign policy, as well as the requirements for the implementation of the National Sustainable Development Strategy.

I also consider the criminal prosecution of other active SDPK members, including ex-mayor of Jalal-Abad Salaidin Avazov and deputy of the Parliament Osmonbek Artykbayev, as politically motivated and unfounded.

"Under a motto of the fight against corruption, in fact, "the hunt for witches" has begun, hunt for those who have their opinion, their position. This is proved by the fact that, in 2017, at least 9 billion soms were returned to the budget as part of the fight against corruption, without any noise and show, and the prospects for this year are expected to be much lower, judging by the current rates," the statement of the SDPK leader says.

According to Almazbek Atambayev, not Sapar Isakov should be brought to justice, but those responsible for the breakdown at the old part of HPP and freezing of the residents of Bishkek, those who bought materials and equipment at inflated prices, if these facts are confirmed in the course of the investigation.

Such helpful friends, as the current director of the Corruption Control Service, are pushing President Sooronbai Jeenbekov to a dangerous path. I warned him about this earlier.

"After the April Revolution, the Social Democratic Party of Kyrgyzstan has made a great contribution to the establishment of stability in the country and the movement of Kyrgyzstan along the path of sustainable development. We must do our utmost to protect the peace and unity of our people. The guarantee of this is a fair power. We must always remember this," the author of the statement notes.

"SDPK intends to act solely within the framework of the law and the Constitution of the Kyrgyz Republic, to demand legitimacy, to appeal to public opinion, to uphold the rights and legitimate interests of our comrades. At the same time, in order to avoid provocations, I urge you, dear compatriots, to refrain from any non-legal methods of struggle," Almazbek Atambayev said.

Sooner or later, the people of Kyrgyzstan will learn the real truth about the reasons for initiating the above mentioned criminal cases and will assess all the participants in this process.