Chief witness in case of Maxim Bakiyev convicted in London

«The court of Great Britain sentenced Israeli citizen Berti Sin Beti, the chief witness in the case of Maxim Bakiyev, accused of attempt to kill a businessman Sean Daley, to six months in prison suspended for 18 months," lawyer Aleksey Eliseev posted on Facebook. 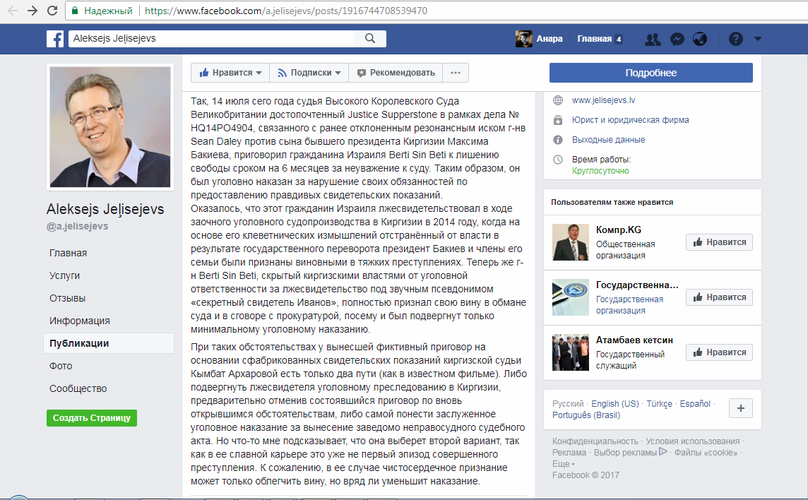 According to him, on July 14, the judge of the High Court of Justice of Great Britain Justice Supperstone in the case related to the previously rejected suit of Mr. Sean Daley against Maxim Bakiyev, the son of the former president of Kyrgyzstan, sentenced Israeli citizen Berti Sin Beti to imprisonment for a period of 6 months for contempt of the court.

«Thus, he was criminally punished for violating his duty on providing true testimony," the report said. 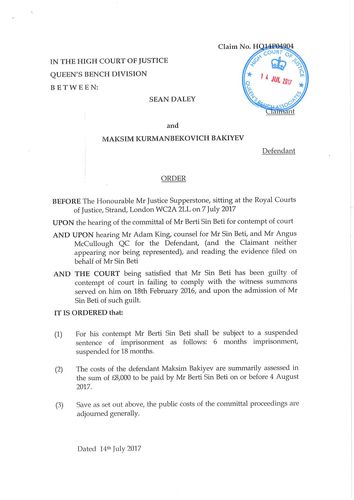 Earlier, the media reported that Israeli citizen Berti Sin Beti was arrested in .

«Sean Daley claims that Bakiyev Jr. organized an assassination attempt on him. It was reported that he mentioned this in a conversation with businessman Berti Sin Beti. He is a witness in the case of Daley, but did not appear in court. However, attorneys of Berti Sin Beti claim that their client was bribed and intimidated," law firm Grand Profi, representing the interests of Sean Daley stated.

According to the investigation, company in 2005 received the right to develop Jerooy deposit in Talas.

But in 2006, Maxim Bakiyev, for his personal gain, forced it to sell license to another company. In  Bishkek, a representative of  company Sean Daley survived murder attempt. He left .

In 2014, the Pervomaisky court of Bishkek sentenced Maxim Bakiyev and ex-head of the State Guard Service Zhanysh Bakiyev to life in prison for an attempt to murder Daley.

Recall, the High Court of London, by its order dated June 16, case No. CL–2016-000205, blocked any procedural actions of the Kyrgyz side until the full payment of all sums to Maxim Bakiyev with interest accrued on them daily.

PM of Kyrgyzstan notes growth in COVID-19 incidence
News brief
27 September, Sunday
13:00
American Andrew Wheeler: Nothing beats Naryn’s bozo American Andrew Wheeler: Nothing beats Naryn’s bozo
26 September, Saturday
15:43
Will quarantine be introduced after the elections? President's answer
12:43
An-26 military plane crashes near Kharkiv, cadets killed
10:58
USA may limit student visa period for Kyrgyzstanis to two years
10:40
Seven more medical workers diagnosed with coronavirus in Kyrgyzstan
10:35
158 new cases of pneumonia, COVID-19 registered in Kyrgyzstan, 46,090 in total
10:30
155 more people recover from COVID-19, pneumonia in Kyrgyzstan
10:16
Private pharmacies to be liquidated in all hospitals of Issyk-Kul region
09:58
Cuba could be granted observer status in EAEU by the end of 2020
09:43
Construction of new building of Jalal-Abad hospital to be completed in November