Monument to Manas the Magnanimous unveiled in Ankara

Grand opening of a monument to the hero of the Kyrgyz epic Manas the Magnanimous took place on the main square of Kecioren municipal district in Ankara (Turkey) on occasion of the 30th anniversary of Kyrgyzstan’s independence. The Information Department of the Ministry of Foreign Affairs of Kyrgyzstan reported.

In his speech, the Ambassador Kubanychbek Omuraliev expressed confidence that this monument would become a symbol of the eternal friendship of the two peoples. 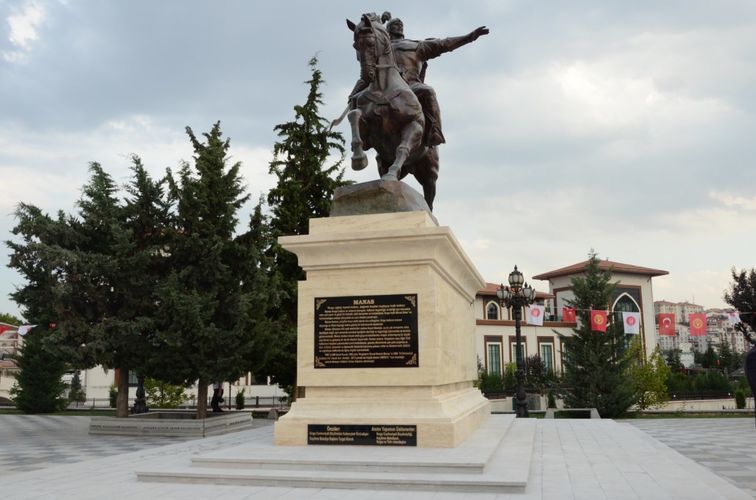 Kyrgyz melodies were played on the komuz, videos about Kyrgyzstan and illustrations from the Manas epic were demonstrated at the event.

As the Foreign Ministry said, within the framework of the celebration of the 30th anniversary of independence and in order to promote the image of Kyrgyzstan in Turkey, the flag of the Kyrgyz Republic was raised on an air balloon. It was hanged at the historic fortress in Cappadocia.

The two tallest buildings of the Union of Chambers and Commodity Exchanges of Turkey in Ankara were decorated with the colors of the flag of Kyrgyzstan.
link: https://24.kg/english/205771/
views: 838
Print
Related
Orhan Inandi files application to renounce Turkish citizenship
Trial of Orhan Inandi begins in capital of Turkey
Five documents signed following meeting of Kyrgyz-Turkish Commission
Kyrgyzstan asks to increase period of visa-free stay of citizens in Turkey
Turkey ready to support project for construction of HES on Naryn river
Ulukbek Maripov proposes to hold Days of Culture of Kyrgyzstan and Turkey
Ulukbek Maripov: Many problematic issues discussed and resolved with Turkey
Fuat Oktay: Our goal is to achieve trade turnover of $1 billion
Kyrgyzstan proposes to create Kyrgyz-Turkish Development Fund
Prime Minister Ulukbek Maripov meets with Turkish businessmen
Popular