Andrew Russell Wheeler came to Kyrgyzstan from America four years ago via the Peace Corps as an English teacher. Before that, he lived in the United Arab Emirates. 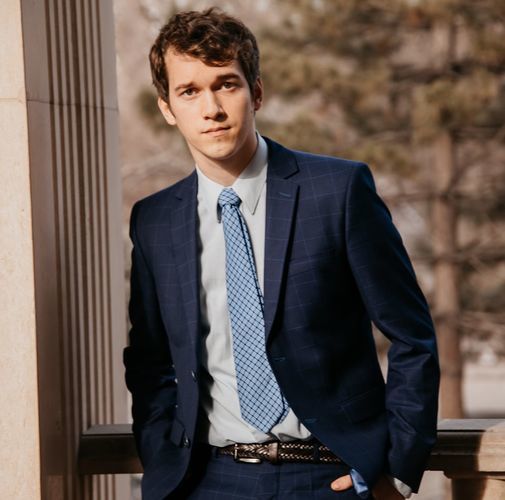 «I wanted to know more about local practice and expression of Islam throughout the world. Kyrgyzstan, a post-Soviet state with a population predominately identifying as Muslim, was a natural fit,» he told.

Soon after moving here, I fell in love with the mountainscape and the unique culture and history of the region.

Andrew lived for some time in Naryn and recently moved to Bishkek. He teaches geography here.

— What has fascinated you when meeting the locals?

— Early one crisp January morning I was making the long daily journey to work, trudging through snow and slipping over ice, when a burly, bearded stranger chased me down on horseback, insisted I shake his hand (I complied) — no, with the glove off (I begrudgingly complied) — and told me off for failing to be the one to initiate contact before riding off again. 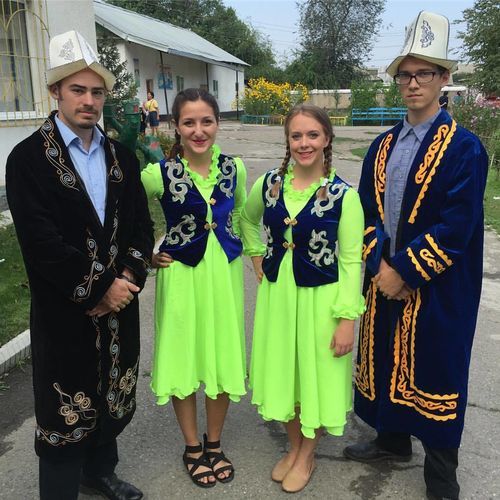 I quickly discovered that forgetting to greet a stranger or acknowledge the arrival of a friend was a social sin on par with or greater than coming to work wearing a pair of dusty shoes — that is, worse than murder.

— What has disappointed you?

— As an American, though I was raised with the phrase «respect your elders», my life hasn’t really revolved around it. We value independence and tend to move out of our parents’ home to make our own lives early; sometimes we move very far away. The nearest relatives to my parents are at least a four hours’ drive away, and the nearest ones after that are around ten hours away. When we get together, we have a great time and enjoy parties with activities in rooms throughout each other’s homes, talking one-on-one and enjoying each-other’s company. 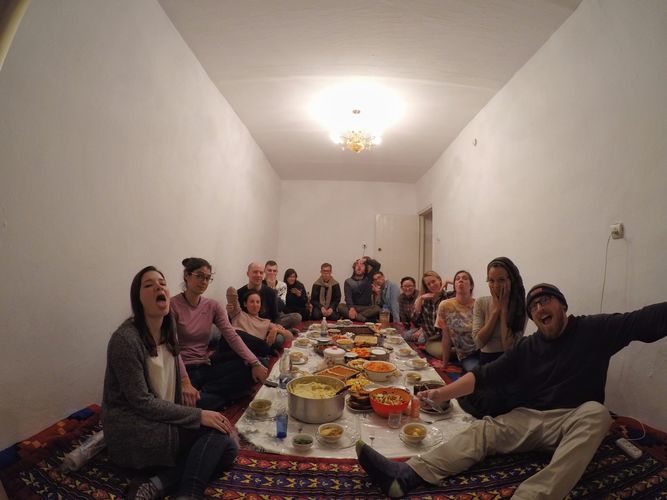 In Kyrgyz culture, parties, more often than not, consist of a large number of individuals around a long table, taking turns speaking and singing and telling jokes. Life revolves around family.

When the aksakal speaks, everyone stops and listens. I would love to see some of this adopted in American culture, but I was often disappointed to see young girls skipping school to look after their siblings at home or marrying before they could finish their own education and start their own careers.

- Do you have many friends here?

— I had to break through my introversion to survive in Naryn, where it was crucial that I learn Kyrgyz to communicate my needs to my host family, neighbors, and colleagues. 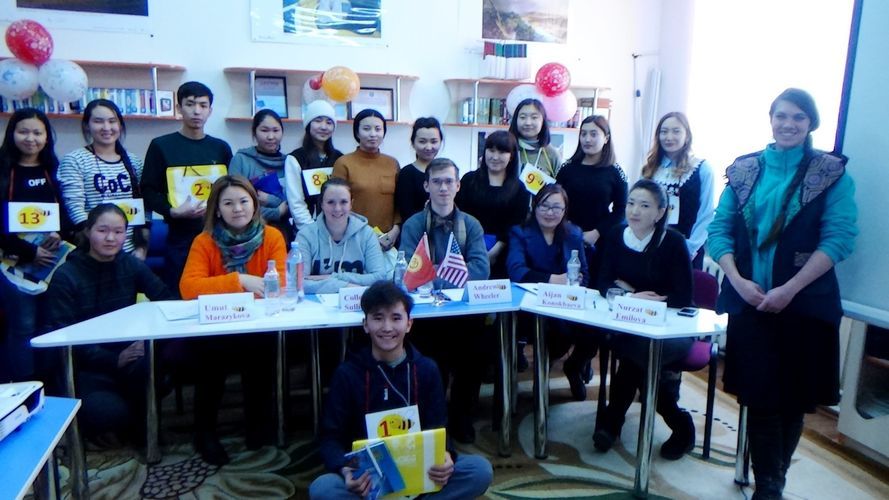 Practice makes perfect; it also makes friends. I have established good relationships with people throughout the whole country in my time here.

— I love Bishkek! The Soviet architecture can appear a bit alien at first glance, but if you spend time looking at it you’ll notice that families and businesses make each space unique with different extensions, decorations, and of course histories. The murals and public works of art—old and new—are a fascinating way to delve into the living history of the city.

— What is your favorite place in this city?

— My favorite place in the city is probably the upper end of Ala-Archa River by Victory Park. The walk from the urban landscape by Ataturk to the open fields and mountains visible from the southern highway is inspiring.

— I would like the public to become more aware of the role they have to play in the environment around them. I said before that I love Bishkek, and I do, but I also struggle to live here in the winter because of the high pollution levels. This is not something the government alone can solve. We need to stigmatize littering, to make recycling the norm, and to reduce emissions at home and on the streets.

— Where have you been to in Kyrgyzstan, except for the capital?

— I’ve spent most of my time in Chui and Naryn, though I’ve seen much of the country in my time here. Last summer I visited each oblast of Kyrgyzstan filming a short series on food in the region and I regularly go on excursions to places like Kol-Tor, Tash-Rabat, and Son-Kol with my colleagues, friends, and Geography students. 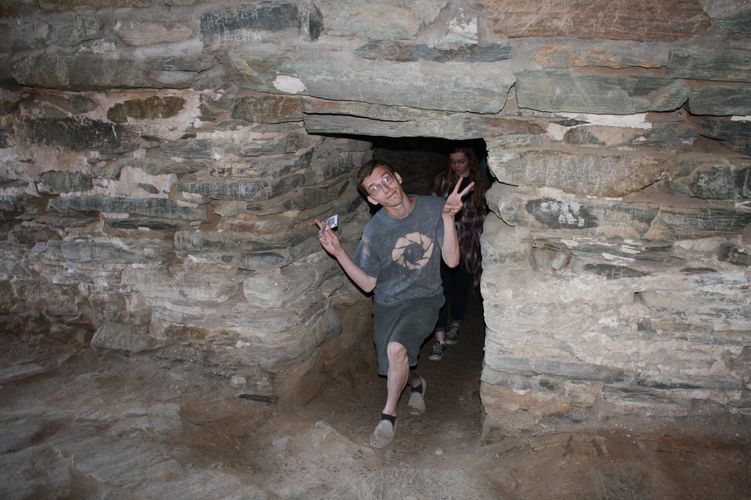 My favorite location changes with the seasons. In winter, nothing takes the place of the hoarfrost-covered trees along the highways of Naryn.

In spring, the mountain flowers of At-Bashy, Suusamyr, and Chychkan are a botanists’ (and honey-lover’s) paradise. In summer, nothing beats a hike up to an alpine lake like Chatyr-Kol, which I’ve been dreaming of. In fall, however, I like to walk among the golden leaves along Erkindik Boulevard back home in Bishkek.

— Growing up I’d recite the Lord’s Prayer, which beseeches God to «give us this day our daily bread and forgive us our debts, as we also have forgiven our debtors».

I never really grasped the meaning behind this prayer until moving to the village, where bread was so respected you couldn’t place it upside-down or let it touch the ground. Heaven forbid you throw it out.

A colleague of mine in Peace Corps once told me a story of how one of his students was late for class, having decided to make a quick jaunt to the nearby store for an eight-som ice-cream cone. The student came back late for class, ice-cream cone in hand, and was told the snack needed to be in his stomach or in the trash in the next ten seconds or a report would be filed. Not wanting to get in trouble, the student chose to throw away the ice cream and stuff the cone in his mouth before joining his class inside. I could hardly believe this story until I had a similar encounter.

Outside of its wafer and cone forms, I could never find it in the little stores scattered around Kuibyshev. It slowly dawned on me that this inconvenience wasn’t an accident. No one wanted store-bought bread. Bread came from the hard work of the people around you—from your father farming the wheat, borrowing the community’s tractor and combine from the village government to do so, to your neighbor, lending our his mill (sometimes for free) to process it into wheat, to your mother who worked it into dough and eventually fresh bread every day. Each day’s bread was a representation of the combined efforts of the local neighborhood and family community. You can’t buy that. It’s something you work for each day as you greet strangers, shake hands, and play your part in the village economy. Bread brings people together such that it would be shameful to leave someone’s home without at least an quick ooz tiy to acknowledge their hospitality and hard work.

Regarding more unique cultural gems, my friends back in Naryn will kill me for saying this, but I adored the gulchatay and beshbarmak I had in Talas. Nothing beats Naryn’s bozo, however, and the dymdama there is a dream. I also fell in love with lagman, apple-vinegar ashlyam-fu, and the plov in the South, but my favorite aspect of Kyrgyz cuisine has been the new appreciation of tea it has imparted upon me. Prior to coming to Kyrgyzstan, I almost never consumed it.

Nowadays I won’t pass up the opportunity to drink a cup or ten of black tea with a healthy spoonful of blackcurrant and sea buckthorn berry jam. It’s an absolute delight.

— What would you never try and why?

— I like to try everything once. This has led to mixed adventures (good and bad) involving braided intestines, sheep eyes, byzhy, chuchuk, olobo (sheep lung filled with milk and butter), and my nemesis, kurut. One food I have been offered many times and will never try, however, is brains. I just don’t want to eat brains.