Eduard Auer: EU has proved to be a reliable partner of Kyrgyzstan 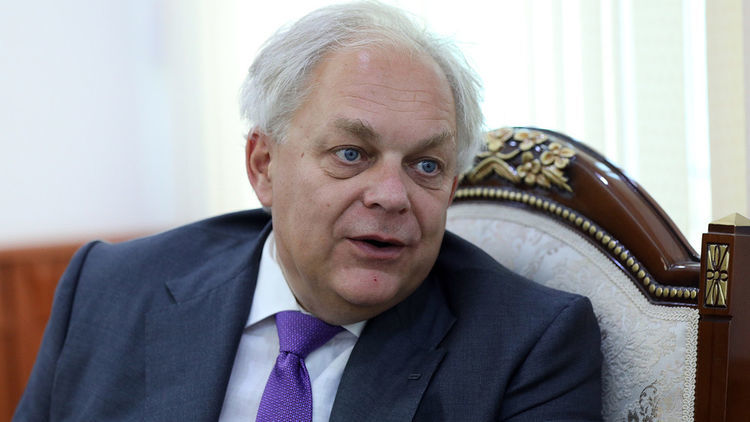 — Could you describe the current state of play of bilateral relations between the EU and Kyrgyzstan?

— The relations between the EU and Kyrgyzstan date back to early 1990s. Since then we have been fruitfully working together in accordance with the joint agenda. The EU has proved to be a reliable partner of Kyrgyzstan — we have always been supporting democratic reforms in Kyrgyzstan, economic development, provided assistance in the areas of judiciary, rural development, education, social affairs, etc.

Recent years have been very intensive and fruitful in the relationship between the EU and Kyrgyzstan.

Since 2013, Kyrgyz senior leadership visited the EU four times. The last such visit took place in April 2018 when President Sooronbai Jeenbekov was in Brussels and met with the leadership of the European Union. Further visits were planned for 2020, but had to be postponed because of the COVID 19 crisis.

In turn, former HRVP Federica Mogherini visited Kyrgyzstan twice — in November 2017 and July 2019. During the latter visit Kyrgyzstan and the EU initialed new Enhanced Partnership and Cooperation Agreement (EPCA) which reflects previously reached heights in our cooperation and sets new areas and goals of our cooperation.

This is an important milestone in bilateral relations between the EU and Kyrgyzstan, as the new Agreement will significantly deepen political and economic ties between the two sides for the benefit of their citizens.

— But the EU — the Kyrgyz Republic relations are not only a political dialogue?

— Sure. In parallel with the deepened political dialogue, we have been increasing our development cooperation with Kyrgyzstan. To remind, the budget of the current Multiannual Indicative Programme (MIP) for 2014-2020 reached EUR 174 million which is 70% more than budget of previous MIP for 2007-2013. This is all grants.

Furthermore, Kyrgyzstan is the main beneficiary of the Investment Facility for Central Asia, benefiting from around EUR 88 million grants to make loans for municipal investments in water supply and waste management mainly, concessional.

So currently, we work in many areas, but the main ones are rule of law, education and rural development, including water.

— German government recently announced it would gradually cut bilateral development cooperation in some areas. May it lead to similar decisions by other EU member states?

— It was a decision taken by the German government as part of reform of its bilateral cooperation programmes implemented around the world. The details concerning Kyrgyzstan were announced by the German Embassy.

At the same time, Germany will continue supporting Kyrgyzstan through the European Union and international development organizations.

— Which areas of bilateral cooperation can and should be strengthened/deepened?

— Since the current Cooperation Programme is ending this year, we will now be developing a new one for 2021-2027 in close consultation with the Kyrgyz authorities. As it happens the EU has, only last year presented its new priorities, which as I see it, are completely in line with the Kyrgyz priorities: the Green deal, green economy for sustainable development, growth and jobs, digitalization, governance and Rule of Law.

We are already working on education and Rule of Law, these are important bases for an equal and sustainable society, and I hope that this is will be the basis of our partnership.

Hopefully we can also work together to support Kyrgyzstan in its endeavor to ensure access to clean water for all, to fight climate change, and develop a sustainable green economy which provides jobs for all and youth in particular.

— In recent years the Kyrgyz Republic has been prioritizing digitalization. Is the EU ready to support this direction?

— We will very soon start support for the digital agenda, as this could be an important driver or tool for improving access to public and private services, but in particular we support the commitment for more transparency. So, these are some of the sectors where we would like to deepen our cooperation with the Kyrgyz Government and civil society.

I would also like to note that we take into account recommendations of local civil society organizations which play an important role in Kyrgyzstan and are essential for transparency and democratic development of Kyrgyzstan. Their recommendations are very helpful and useful.

We hope that the current draft law on NCO’s considered at Parliament will not lead to creation of a more difficult environment for CSOs.

— EU and Kyrgyzstan were going to sign EPCA in 2020. Has COVID-19 affected these plans? When the document will be signed? This year or next?

— Indeed, COVID-19 affected our planning. At the moment the EPCA is undergoing legal and linguistic scrubbing in Brussels and Bishkek. We hope to sign the agreement before the end of 2020.

— How the trade relations between the EU and Kyrgyzstan are developing?

— Economic activity between the EU and the Kyrgyz Republic is developing. According to the EU statistics, the trade turnover between the 27 Member States of the EU (excluding the UK) and Kyrgyzstan in 2019 totaled to EUR 433 million, out of which EUR 104 million is the import to the EU from Kyrgyzstan, and EUR 329 million is the EU exports to Kyrgyzstan.

The main articles of Kyrgyz exports to the EU are precious and base metals as well as vegetables, while the EU exports transport equipment, chemical products, machinery and appliances, foodstuff, beverages, textiles.

— Does Kyrgyzstan use its trade potential in full?

— Indeed, there is a room for improving our trade potential, in particular Kyrgyzstan’s export to the EU. To promote, encourage and diversify Kyrgyz economy, in 2016 the EU granted Kyrgyzstan GSP+ status, which allows exporting over 6,000 goods to EU without customs tariffs.

It did pay off immediately; between 2017 and 2018, trade volume has increased 30 percent for the areas covered by the GSP+.

For example, fruits and nuts are covered by GSP+ and the export of these commodities rose by 100 percent between 2017 and 2018 totaling to EUR 3 million. As for 2019, the volume of GSP+ covered goods and commodities imported from Kyrgyzstan to the EU reached EUR 4.1 million, including EUR 1.7 million of fruits and nuts as well as of peel of citrus fruits or melons. To note, GSP+ might only cover a small part of the bilateral trade, but it is a dynamic part of the trade volume.

The EU market is very big — 450 million consumers. It is up to Kyrgyz companies how well they use this market potential, including the opportunities from GSP+. To facilitate it, we organized several technical missions from the EU to help local partners to adapt to GSP+ requirements.