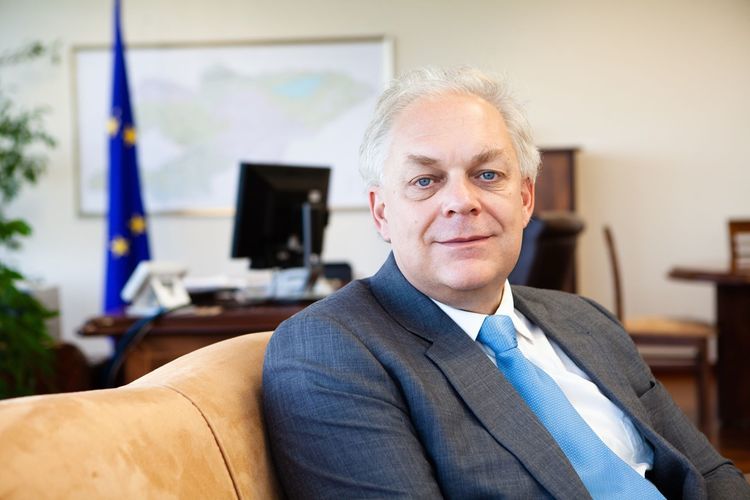 European Union Ambassador to Kyrgyzstan Eduard Auer gave a large interview to 24.kg news agency. He told how European integration was developing, how Brexit changed the EU and how the events will influence the relations between the European Union and the Kyrgyz Republic.

— The EU celebrates its 70th anniversary this year. What results has the EU achieved in 70 years?

— The history of the European Union started on 9 May 1950 when French Foreign Minister Robert Schuman suggested the creation of the European Coal and Steel Community. Europe had been struggling to overcome the devastation brought by the Second World War. Determined to prevent another such terrible war, European governments concluded that pooling coal and steel production would make war between historic rivals France and Germany «not merely unthinkable, but materially impossible.»

That is what preceded the Schuman’s declaration which became the first milestone towards European integration.

To date, the EU is the most successful integration project in the history which unites 27 member states with 450 million of citizens under the joint European flag and shared values of democracy, solidarity, peace, equality, rule of law, respect of human rights and freedoms. Peaceful existence and history of the EU were highly praised by the world, therefore the EU was awarded by the Nobel Peace Prize in 2012 for advancing the causes of peace, reconciliation, democracy and human rights in Europe.

— What are the advantages of the EU for its member states?

— The Union has no internal borders between member states which allow its citizens to live, study or work anywhere within the block. Europe’s single market is the largest in the world with transparent rules and regulations.

Besides, the EU is the largest trading bloc and one of the most open ones.

Moreover, the EU has become the largest donor and biggest development partner for many countries. EU has proved to be major international player promoting peace, economic development, democracy and the transition to a green economy around the world.

Indeed, the EU as well as all countries and blocks around the world faces many challenges, especially, in light of COVID-19 pandemic. The latter had its impact on free movement of people in the EU, but currently saving people’s lives is the most important mission for all the countries of the world. But the difficulties and challenges only make us stronger. All EU member states as well as EU institutions and development banks united their efforts to response to the COVID-19 pandemic through Team Europe approach, a EUR 20 billion worth dedicated support package aimed to help our partners throughout the world.

— How did the coronavirus pandemic affect the European Union?

— The EU as well as all countries and blocks around the world faces many challenges, especially, in light of COVID-19 pandemic. The latter had its impact on free movement of people in the EU, but currently saving people’s lives is the most important mission for all the countries of the world.

But the difficulties and challenges only make us stronger.

All EU member states as well as EU institutions and development banks united their efforts to response to the COVID-19 pandemic through Team Europe approach, a EUR 20 billion worth dedicated support package aimed to help our partners throughout the world.

— How did/will Brexit affect the EU?

— Brexit was a sad moment for many European and British citizens. Nevertheless, we have always respected the sovereign decision of 52% of the British electorate, and we now look forward to starting a new chapter in our relations. Thanks to the Withdrawal Agreement which foresees a transition period, until the end of 2020 at least, the UK will continue to participate in the EU’s Customs Union and Single Market, and to apply EU law, even if it is no longer a Member State. During this period, the UK will also continue to abide by the international agreements of the EU.

This agreement also minimizes disruption for our citizens, businesses, public administrations until the end of the transition.

— Not exactly, with the transition period in place, there is a degree of continuity. However, there are already significant changes. With its departure from the EU, the UK has formally left hundreds of international agreements concluded by or on behalf of the Union, to the benefit of its Member States, on topics as different as trade, aviation, fisheries or civil nuclear cooperation.

I wish to reiterate that at the very core of the EU project is the idea that we are stronger together; that pooling our resources and initiatives is the best way of achieving common goals. Brexit does not change this, and we will continue to take this project forward as 27.

When it comes to UK, it will remain a close and like-minded partner to the EU, as is, for example Switzerland or Norway.

— How will Brexit affect the relations between Kyrgyzstan and the EU?

— I would also like to highlight that Brexit hasn’t had any impact on EU-Kyrgyz bilateral agenda. We continue our dialogue and cooperation on many levels and in many areas. The Enhanced Partnership and Cooperation Agreement which was initialed in July 2019 will further intensify the cooperation.

— Is there anything common between the EU and the Eurasian Economic Union? Can the EU experience be helpful for successful Eurasian integration?

— Both the EU and the Eurasian Economic Union are ambitious integration projects which have improvement of ordinary people’s life as one of strategic goals.

Europe was built on the principles of cooperation, both within its borders and with our neighbours.

— Is interaction between the EU and the Eurasian Union possible?

— The development of relations between the EU and the Eurasian Economic Union (EEU) remains a long-term perspective and depends on the political decision of EU Member States. For the time being, the European Commission maintains contacts at a technical level with the Eurasian Economic Commission in areas where the EEU has assumed responsibilities on behalf of its members.

We hope this could solve practical problems, facilitate understanding with regard to regulatory issues and advance regulatory convergence in areas such as technical regulations, intellectual property rights protection, trade defence instruments, customs issues or sanitary and phytosanitary matters. This is all in the interest of the people.

Read about relations between Kyrgyzstan and the European Union in the second part of the interview.