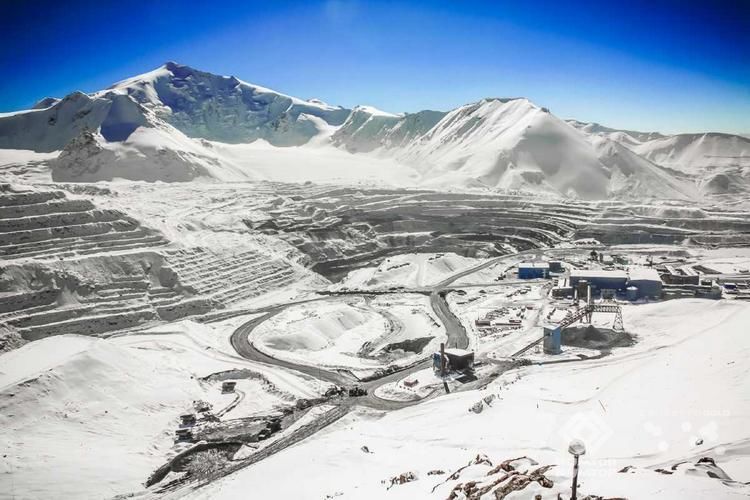 Centerra Gold continues to prioritize the health, safety and well-being of its employees, contractors, communities and other stakeholders, particularly during the current outbreak of COVID-19. To date, the Company has experienced no operating or production disruptions nor any supply chain interruptions or impact. Kumtor and Mount Milligan operations continue for the time being and, in the case of Kumtor, with the support of the Kyrgyz Republic Government.

Centerra has taken the following measures to provide its employees with accurate information, help prevent infection and reduce the potential transmission of COVID-19:

During the fourth quarter of 2019, exploration drilling programs continued with the completion of seventy-two diamond drill holes for 17,777 metres, including 3,202 metres of infill drilling in the Hockey Stick Zone and four RC drill holes for 691 metres. Exploration drilling focused on testing zones of mineralization near the surface for additional open pit resources on the north-east side of the Central Pit, at the corridor between the Central and Southwest pits, and on the flanks of the Sarytor target area.

An Airborne magnetic geophysical survey was also carried out within the Kumtor Concession area and beyond.

A complete listing of the drill results, drill hole locations and plan map for the Kumtor Mine have been filed on the System for Electronic Document Analysis and Retrieval (‘SEDAR’) at www.sedar.com  and are available at the Company’s web site www.centerragold.com.

Kumtor recognized 25% higher revenues and 38% higher earnings from mine operations during 2019 when compared to the prior year as a result of more ounces sold, higher realized gold prices and lower unit costs from the processing of ore with higher grades and recoveries. Cash provided by mine operations was $85.3 million higher in 2019 when compared to 2018 due to higher realized gold prices, higher ounces sold and higher accounts payable.

During 2019, Kumtor focused on developing cut-back 19 and stripping and unloading of ice from cut-back 20. Total waste and ore mined in 2019 was 156.4 million tonnes compared to 180.3 million tonnes in the comparative prior year, due primarily to weather delays affecting the truck and shovel availability and the suspension of mining operations in December 2019.

Mining costs, including capitalized stripping, were $197.6 million in 2019 compared to $211.1 million in 2018. Mining costs decreased due to fewer tonnes mined as a result of the suspension of mining in December 2019 and poor weather conditions during the summer, resulting in a decrease in diesel costs, partially offset by higher costs for spare parts.

Milling costs were $71.6 million in 2019 compared to $67.3 million in the comparative prior year, which increased due to higher carbon fine processing, costs related to the comprehensive maintenance shutdown for the planned replacement of equipment (not performed in 2018) and higher grinding media and cyanide costs due to the processing of a harder ore type.

Site support costs in 2019 totaled $49.0 million compared to $51.7 million in the comparative prior year, the decrease was due primarily to fewer contractors on site and lower camp supply costs.

Production costs per ounce of gold sold were $381 for 2019, consistent with $394 in 2018, due to ounces sold and cost of sales increasing by similar percentages.

Notes:
Under the Agreement on New Terms dated as of April 24, 2009, the revenue-based tax and contributions to the Issyk-Kul Region Development Fund are estimated based on actual cash revenues from sales during the period under review.

Contribution to Nature Development Fund and Contribution to Regional Social Partnership Fund are made under the Strategic Agreement among the Government, Centerra Gold Inc. and KGC of September 7, 2017, and in accordance with Additional Contributions of July 8, 2019.

Payments within the Kyrgyz Republic 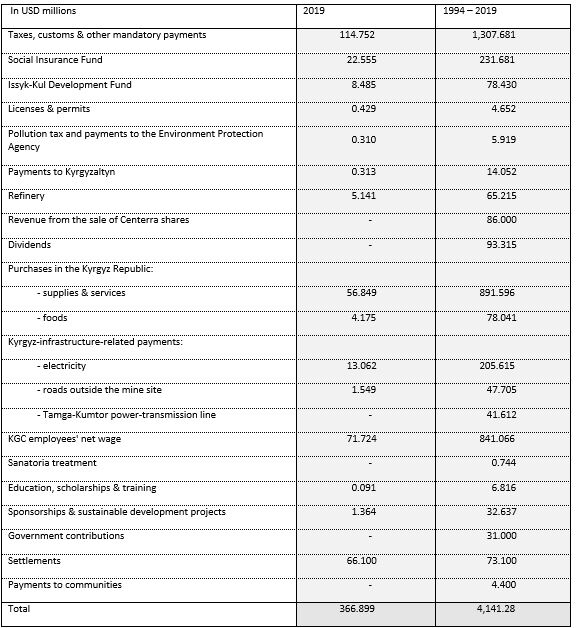 Kumtor's impact on the macroeconomic performance of the Kyrgyz Republic

According to preliminary reports of the Kyrgyz Republic National Statistics Committee,

Scott Perry, President and Chief Executive Officer of Centerra Gold stated, “We are fully committed to understanding the circumstances that led to the troubling safety incidents at Kumtor in December 2019 and February 2020, so that we can take all necessary steps to prevent such incidents from happening in the future. We remain steadfast in our resolve to ensure that everyone who works at our operations can do so safely and will return home safely, each and every day. There is nothing more important. Kumtor had another strong year exceeding its revised production guidance in delivering 600,201 ounces of gold production at an all-in-sustaining cost on a by-product basis of $598 per ounce sold, which was lower than the low-end of its all-in-sustaining cost guidance.

The safety of our employees remains our top priority during the outbreak of COVID-19 and we are taking action based on the best available information we have. To ensure appropriate social distancing, the Company has temporarily closed its head office in Toronto and regional offices in Bishkek, Kyrgyz Republic, Prince George, British Columbia, Canada and Ankara, Turkey and has asked its workforce to operate remotely.”

The Kumtor open pit mine, located in the Kyrgyz Republic, is one of the largest gold mines in Central Asia operated by a Western-based gold producer. It has been in production since 1997 and has produced over 12.6 million ounces of gold to December 31, 2019.

Centerra Gold Inc. is a Canadian-based gold mining company focused on operating, developing, exploring and acquiring gold properties in North America, Asia and other markets worldwide and is one of the largest Western-based gold producers in Central Asia. Centerra operates two flagship assets, the Kumtor Mine in the Kyrgyz Republic and the Mount Milligan Mine in British Columbia, Canada and now has a third operating gold mine, the 100% owned Öksüt Mine in Turkey.  Centerra Gold's shares trade on the Toronto Stock Exchange (TSX) under the symbol CG. The Company is based in Toronto, Ontario, Canada.

The Kyrgyz Republic, via Kyrgyzaltyn JSC, is Centerra Gold's largest shareholder owning 77,401,766 common shares. As of April 7, 2020, Kyrgyzstan's interests were estimated at $ 490 million.

Additional information on Centerra Gold Inc. and the full text of the news release on the 2019 Fourth Quarter and 2019 Year-end Results are available on SEDAR at www.sedar.com and the corporate websites at www.centerragold.com and www.kumtor.kg.