Prime Minister of Kyrgyzstan intends to get dividends from Centerra Gold 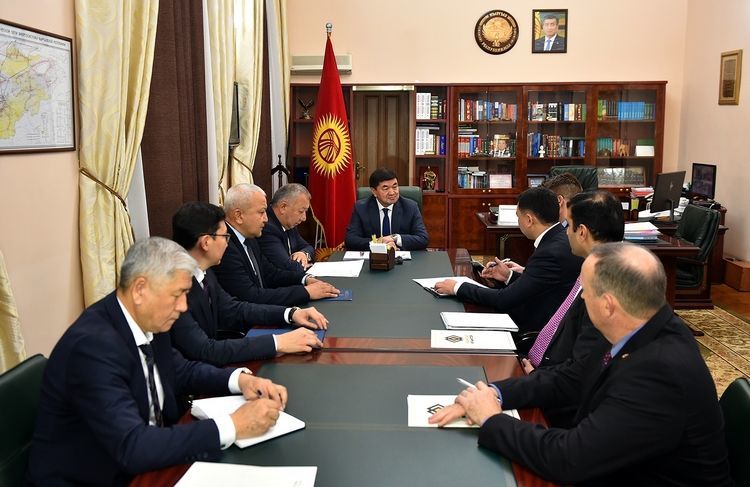 During the meeting, the parties discussed issues of the work of Centerra Gold Inc. and Kumtor, taking into account the entry into force of a strategic agreement and an increase in production at the mine.

By the end of the year, gold production is expected to increase to 18.2 tons.

Mukhammedkaliy Abylgaziev and Scott Perry exchanged views on the issue of further payments under the strategic agreement. They noted that regular contacts between the parties increase effectiveness of cooperation in the framework of Kumtor project and favorably influence both the cost of stock of shares of Kyrgyzstan in Centerra Gold Inc. and the cost of the company as a whole.

The Prime Minister designated to the President of Centerra Gold Inc. a number of issues, which, in his opinion, would serve as an additional confirmation of the mutual commitment to the further development of the partnership.

The Prime Minister also stressed the need to consider the issue of moving the Reclamation Trust Fund to Kyrgyzstan. The Government is ready to provide the necessary guarantees and promptly agree on all conditions for placing the funds in the country’s banks.

According to Mukhammedkaly Abylgaziev, until closure of the mine, it is advisable to place these funds in Kyrgyzstan and use them effectively to support domestic small and medium-sized businesses.

The Government intends to apply this unified approach to all mining companies operating in Kyrgyzstan.

Scott Perry stressed importance of Kumtor mine in Centerra Gold Inc. and noted that the issues raised by the Prime Minister would be submitted to the Board of Directors of the company in the near future.

link: https://24.kg/english/136516/
views: 2307
Print
Related
Commission formed to investigate death of Kumtor employee on Petrov lake
Body of drowned Kumtor employee found in Dzheti-Oguz
Kumtor employee goes missing in Dzheti-Oguz on Petrov lake
Mining operations at Kumtor mine to be fully resumed next week
Mining works to be resumed at Kumtor mine
Safety measures to be improved at all production sites of Kumtor mine
Incident at Kumtor: Search for missing employees stopped
Mendkovich: If incident occurred not at Kumtor, we wouldn’t have known about it
Ivan Ippolitov: Politicization of incident at Kumtor may end badly
Kumtor incident. Rescuers find car of missing employees
Стоимость акций Центерры на бирже в Торонто (TSX)
на 17.02.2020
USD 7,37