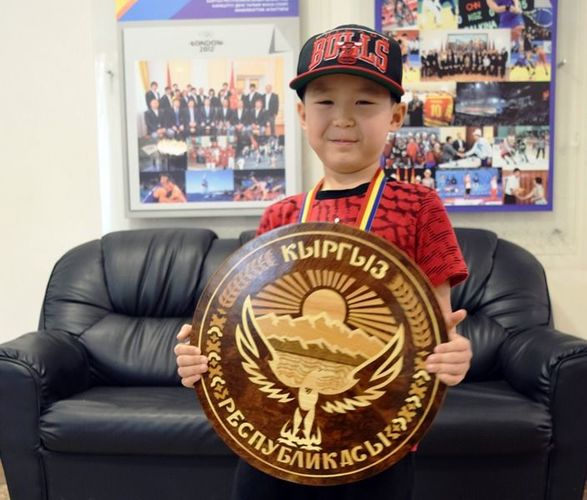 Kyrgyzstani Sultai Chyngyz took part in the Channel One «Best of All» (Luchshe Vseh) Russian TV show. The episode was released on June 16.

«The prince of black and white checks, the master of blitz, the ruler of the castling, the pawn and queen eater, the young grandmaster,» in such a way Maxim Galkin introduced him to the audience.

«Do you play for money?» the moderator asked during a conversation. «I once played and earned 3,000. My dad spent two of them. I gave 1,000 to my grandmother,» said Sultai. «The boy who at the age of six keeps a large Kyrgyz family is for the first time in our studio,» Maxim Galkin said.

Then Sultai played chess with the Director Julius Gusman and in two minutes, playing black, forced him to surrender. Finally, he was awarded a medal.

«The TV show shooting took place in August 2017. But the episode was shown only yesterday,» father of the boy Chyngyz Abylkasymov told 24.kg news agency.

Sultai Chyngyz is a bronze medalist of the World Chess Championship among schoolchildren, prize-winner of the West Asian Championship, champion of the Kyrgyz Republic, winner of many tournaments. Currently, he lives in the USA with his parents and continues to study chess.