Ombudsman of Kyrgyzstan Tokon Mamytov asks to place the former Prosecutor General Aida Salyanova, who is kept in detention center 1 as a part of the investigation of the criminal case on illegal release of crime boss Aziz Batukaev, under house arrest.

He submitted the relevant recommendation to the Bishkek City Court.

Tokon Mamytov stressed that when considering criminal cases and making court decisions, one should keep in mind the fundamental requirement for judges of Kyrgyzstan — to always be impartial.

«In this regard, I ask you to carefully consider and take into account the fact that the charges under the article «Corruption» brought against the ex-Prosecutor General Aida Salyanova and her complicity in the illegal release of the kingpin Aziz Batukaev in 2013 are currently based only on the statements of the former Deputy Prosecutor of Naryn region, Prosecutor for Supervision over Legality in Correctional Institutions (Special Prosecutor) Mairambek Akmataliev,» the Ombudsman stressed.

He added that since there was a court verdict against Aida Salyanova within another criminal case and postponement of execution of the punishment until her daughter turns 14 years old, she has no right to leave the country. He confirmed that Aida Salyanova was in the medical unit of the detention center 1. She complains of heartache.

By a decision of the Pervomaisky District Court of the capital, Aida Salyanova was taken into custody until June 26.

Criminal case on illegal release of Aziz Batukaev was resumed in January 2019. The doctors and a laboratory assistant, who diagnosed him with cancer, are defendants in the case. In addition, former officials and deputies are involved in it.

In particular, the police arrested the former Minister of Health Dinara Saginbaeva, ex-adviser to the head of the State Service for Punishment Execution Kalybek Kachkynaliev, former Deputy Prime Minister Shamil Atakhanov, and also the former Special Prosecutor Mairambek Akmataliev. By a court decision, Dinara Saginbaeva and Mairambek Akmataliev were released from custody. On June 8, the court changed the preventive measure to Shamil Atakhanov, placing him under house arrest. 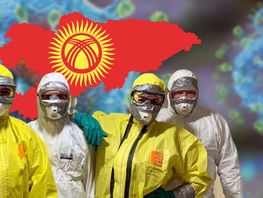