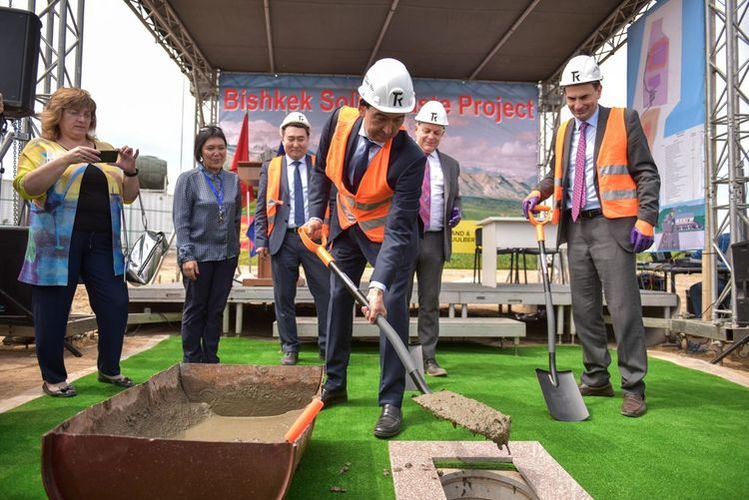 Capsule was laid at the construction site of a new sanitary landfill in Bishkek. Press service of the Bishkek City Administration reported.

The ceremony was attended by the Mayor of the capital Aziz Surakmatov and the Vice President of the European Bank for Reconstruction and Development in the Kyrgyz Republic Alan Pillow.

Work on the new site began on May 7. The City Administration is now waiting for a permit for construction of the landfill and the drilling of a well for water supply from the State Agency for Architecture, Construction, Housing and Communal Services. At the same time, exploratory and design work is underway to close and reclamate the existing landfill.

The City Administration told that crops were sown as an experiment in a small area of ​​the operating landfill together with the Agrarian Institute. In case of a favorable outcome of the experiment, they will be sown on the territory of the entire old landfill after its reclamation.

In 2013, the Government of Kyrgyzstan and the European Bank for Reconstruction and Development signed a loan agreement to finance Improvement of Solid Waste Management System in Bishkek project.

The project stalled from the very beginning. In January 2019, it became known that the Bishkek Prosecutor’s Office opened a criminal case against officials of the Bishkek City Administration on the fact of irrational use of donors’ funds for reconstruction of the Bishkek sanitary landfill.

Bishkek was allocated €22 million for the project. Half of the sum is a loan.

Under the project, eight contracts were signed, five of them were fully completed. In late April, a tender for the construction of a waste sorting plant on the territory of a new sanitary landfill was announced, its intermediate results will be announced in late June.