The Culture Department of the Bishkek City Administration told 24.kg news agency what townspeople would enjoy on the 140th anniversary of the capital.

The city will celebrate its birthday on April 29, but festive events (concerts in the Philharmonic Hall, scientific and practical conference, performances of on-stage performance groups) have been held since March 30.

«One of these days, T.Moldo park will host a book exhibition «My Favorite City»; on April 23, Toktogul Museum will host a round table discussion «History and future of Bishkek city.» The International Children’s Folklore Festival «Nariste» will start at the Philharmonic Hall on April 27. Performance groups from Italy, Turkey, Hungary, Sierra Leone, Russia and Kazakhstan will participate in it. The festival will take place in different parts of the city and will last until May 1. A carnival procession from the Bishkek City Administration building to Ala-Too Square will take place on April 29,» the department told.

«A circus performance for children from low-income families and having health problems is planned. On April 28, all People’s halls in Bishkek will host the festival «Beloved city.» The main day is April 29, when festive events will be organized in different parts of the capital. A concert will be held in the Fighters of Revolution park, a concert of classical music — in the park named after Satylganov. The Old Square will host a festival of flowers, the participants of which will lay 120 meters long, 70 meters wide carpet o flowers. Fireworks will take place in the evening at 11.00 pm,» added the department. 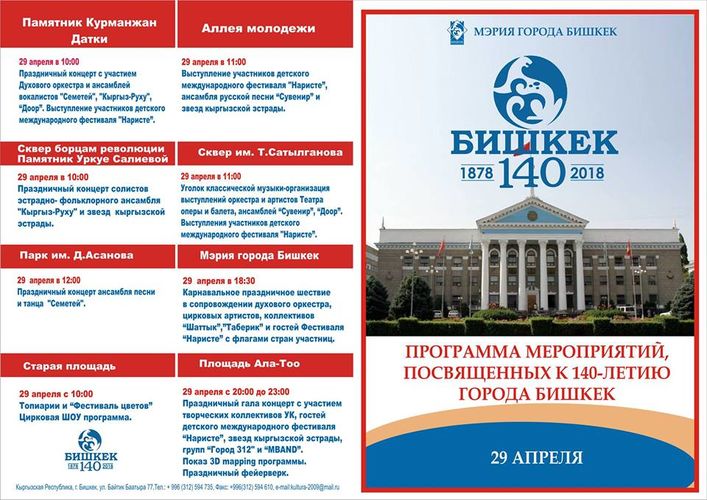