A van, driver of which secretly tied to transport 20 migrants to Russia, was detained in Magnitogorsk. Sinegorye reported.

A new blue Mercedes-Benz looks normal from the outside, but inside it’s a real hangout or hellhole. People laid in it in two layers, and they had some sacks as beds.

The auto inspectors stopped the van on March 27 on Yuzhnouralsk — Magnitogorsk road. Such minivans usually transport food products or up to seven passengers, but they found two dozen people inside. 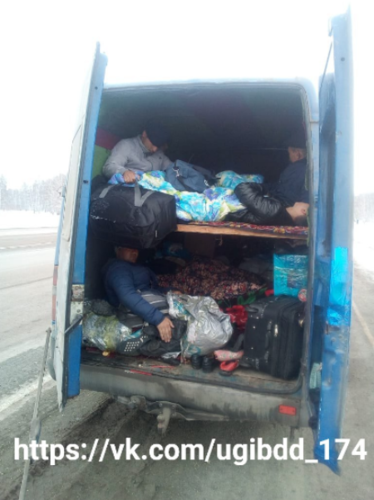 The driver was 47-year-old native of Kyrgyzstan. He justified himself by his decision to help his countrymen, who had little money for the road. The driver and his countrymen were taken to the police for identification.

As reported, two protocols were drawn up — for violation of the rules for transportation of passengers and making changes to the design of the vehicle without permission.

It also turned out that two of his passengers had entered Russia illegally. The police decide what to do with the detainees.