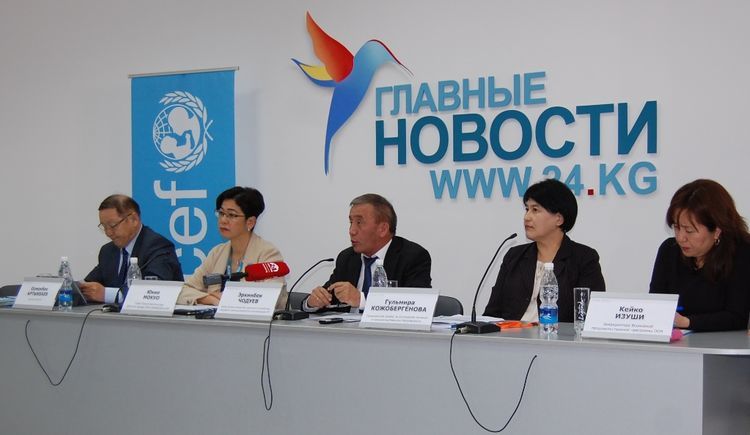 ’s achievements in improving nutrition are recognized in the world. Erkinbek Choduyev, Deputy Minister of Agriculture, Food Industry and Land Reclamation, said this today at a press conference in 24.kg news agency.

According to him, joined the SUN movement in 2011 and actively participates in global congresses every two years. «On November 7-9, the Kyrgyz delegation presented the results in improving nutrition at the global conference in  (). We have actually achieved great results. We have created a multi-sectoral platform for the movement, which includes state agencies, members of Parliament, civil and academic sector, as well as the business community,» the Deputy Minister said.

Erkinbek Choduev noted that improvement of nutrition along with the food safety is a priority in the republic.

The head of the United Nations Children’s Fund (UNICEF), Yukie Mokuo, added that, despite the positive aspects, the consequences and manifestations of the latent famine — anemia, short stature, iodine deficiency, etc — still occur in .

«Almost one in four children under the age of 5 suffers from anemia. Throughout the world, investment in food is the most important for the development of the country. Insufficient nutrition during a disaster is the cause of high morbidity and mortality, the occurrence of chronic diseases in adulthood. And this leads to high financial losses. The total amount of losses is $ 32 million per year. Most of these losses can be prevented if you invest in programs to reduce malnutrition,» she said.

By 2017, Kyrgyzstan achieved 51 percent of the enrichment of flour produced in the country, and in the same year a law was passed that presupposes fines for import of unenriched flour.

«Now faces the goals in the field of nutrition to reduce micronutrient deficiency. One of them is aimed at reducing iron deficiency anemia among women of child-bearing age by 50 percent until 2030 (from 35 percent to 17.5 percent),» UNICEF noted.