Deputy Ryskeldi Mombekov was summoned for interrogation to the Military Prosecutor’s Office of Kyrgyzstan. He himself informed 24.kg news agency. 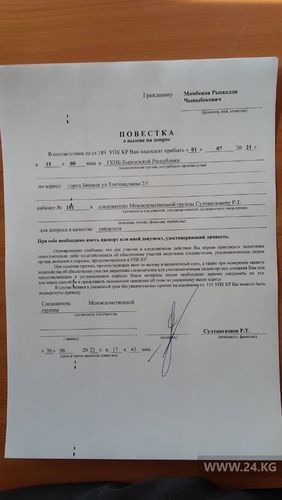 The deputy has to come for interrogation as a witness today at 15.00. The deputy does not know within what case he was summoned. However, he assumes that this is related to the Kumtor case.

Earlier, the deputy had already been summoned for interrogation by the State Committee for National Security within the Kumtor case.

The SCNS is investigating the criminal cases on Kumtor. The beginning of June was marked by high-profile arrests. Former and current deputies of Parliament Torobai Zulpukarov, Iskhak Pirmatov were placed in the SCNS remand prison for two months. The court also ruled to arrest the ex-prime minister Omurbek Babanov and former speaker of Parliament Asylbek Jeenbekov. Their supporters believe these arrests are politically motivated.

Two former deputies Talant Uzakbaev and Almazbek Baatyrbekov were released from custody. They entered into a plea bargain.