Situation at border: Moscow urges to resolve conflict through negotiations

Moscow has been watching with concern the sharp exacerbation of the situation on the disputed section of the border between Kyrgyzstan and Tajikistan. Website of the Foreign Affairs Ministry of Russia reports.

«We express our condolences to the relatives and friends of the victims, and wish the injured a speedy recovery. We welcome the agreements reached on the night of April 30 between the parties to end the clashes and transfer the tense situation to the stage of negotiations, withdrawal of forces and military equipment,» statement by the Spokeswoman for the Foreign Affairs Ministry of Russia Maria Zakharova says.

She called on the parties to reach stable and long-term agreements through further negotiations — in the spirit of alliance and good-neighborliness — that would allow normalizing the situation and take effective measures to prevent recurrence of such incidents.

«We support the decision of Bishkek and Dushanbe to create a joint working group, whose tasks will include information work with the population, as well as patrolling and monitoring of the situation in the border area. Russia, following the principles of strategic partnership and alliance with Kyrgyzstan and Tajikistan, is ready to assist in every possible way in resolving any controversial issues by political and diplomatic methods,» she concluded.

Another border incident began on April 28 near Golovnoy water distribution point in Kok-Tash village of Batken region. Verbal skirmish developed into clashes: the parties began to throw stones at each other. Shootout started later.

At least 134 victims sought medical help, 13 people were killed, including a child, in Kyrgyzstan. According to the Tajik side, more than 150 people were injured and 7 were killed there.

Kyrgyzstan and Tajikistan agreed to cease fire and withdraw military forces to the places of their previous deployment on April 29 at night.

Golovnoy water distribution point is located at the source of the water canals replenishing Tortkul reservoir on the territory of Kyrgyzstan.

According to the Ministry of Emergency Situations of the Kyrgyz Republic, 10 residential buildings burned down in Maksat village, Leilek district, and two — in Kulundu. One secondary school also burned down. Nine residential buildings, 10 gas filling stations, 2 restaurants, 8 shops, REMI casino, a border post and a fire and rescue unit of the Ministry of Emergencies burned down in Batken district. 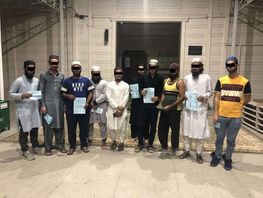 Mass protests begin in Uzbekistan over amendments to Constitution

Pakistan to expand cooperation with Kyrgyzstan in energy sector