Saudi Arabia to hand over medical equipment for $ 500,000 to Kyrgyzstan

President of Kyrgyzstan Sadyr Japarov received the Ambassador Extraordinary and Plenipotentiary of Saudi Arabia to Kyrgyzstan Abdulrahman bin Saeed Al-Jumah on the occasion of completion of his diplomatic mission. Press service of the head of state reported.

Sadyr Japarov reportedly expressed satisfaction with the stable level of interaction in the field of political, economic, cultural and humanitarian cooperation between the two countries, expressing hope for their further strengthening.

He noted the personal contribution of Abdulrahman bin Saeed Al-Jumah as the first ambassador of Saudi Arabia to Kyrgyzstan in achieving the current level of bilateral partnership — strong political relations have been established between the states, active work is underway to build up cultural and humanitarian cooperation.

As the president said, one of the priority areas of Kyrgyz-Saudi cooperation is the development of trade and economic relations. He emphasized the existing real potential in this area, at the same time noting the small volume of trade due to the lack of direct flights between the two countries.

Sadyr Japarov proposed to open a direct air route between the two states for development of trade relations with Saudi Arabia.

He also called on the Saudi side to become a partner in implementation of major investment projects.

Sadyr Japarov awarded Abdulrahman bin Saeed Al-Jumah a state award — the Danaker Order for his significant contribution to strengthening friendship and cooperation between the two countries. 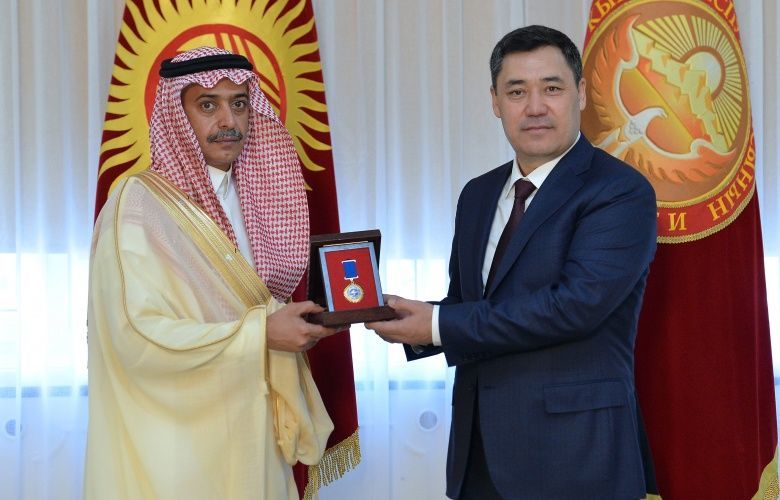 The Ambassador conveyed to the head of state the words of greetings from the King of Saudi Arabia Salman bin Abdul Aziz Al Saud and the Crown Prince Mohammed bin Salman Al Saud.

Abdulrahman bin Saeed Al-Jumah added that Saudi Arabia supports opening of direct flights between the countries, and also informed about donation of medical equipment for about $ 500,000 to the government of the Kyrgyz Republic in the near future.

Following the meeting, the parties agreed to hold a business forum and a business fair in Saudi Arabia in the near future with participation of representatives of business communities of the two states.