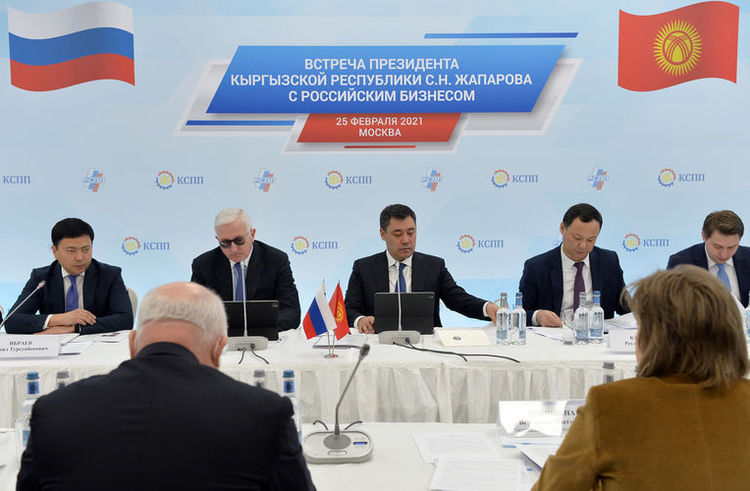 President of Kyrgyzstan Sadyr Japarov met with representatives of large Russian business community in Moscow at the site of the Russian Union of Industrialists and Entrepreneurs. The presidential press service reported.

The head of state stressed in his speech that Kyrgyzstan attaches great importance to maintaining and deepening the Kyrgyz-Russian strategic partnership and alliance, especially in the trade, economic and investment spheres. He noted the presence of mutual interest in promoting joint projects in priority sectors of the economy, including energy, mining, agriculture, subsoil use, industrial production and tourism.

«We clearly understand the need for practical implementation of large investment projects, which in turn will contribute to development of small and medium-sized businesses, as well as diversification of ties, creation of new production facilities, and an increase in the added chains of the production and service cycle,» Sadyr Japarov said.

The head of state also told that one of his first decrees was aimed at improving the investment climate, ensuring freedom of capital movement, and protection of investors. He promised that measures would be taken at the legislative level to simplify the procedures for preparation, consideration and implementation of investment projects.

«I want to assure you that Kyrgyzstan is ready for close contact with investors. Issues of development of energy, industry and infrastructure, tourism and new technologies are more than ever relevant areas of our joint cooperation today. I am convinced that large infrastructure projects will be implemented under the new conditions, cooperation in the field of digitalization and new technologies will advance,» the head of state said.

Sadyr Japarov also noted potential in the field of light industry. In particular, he told about opening of joint export-oriented enterprises of the garment and textile industry. In addition, the President sees a prospect in the development of processing industries for agricultural products, including promotion of construction of trade and logistics centers in Kyrgyzstan for accumulation of agricultural products and further supplies to the markets of the EAEU countries and abroad.