Kübra Erbayrakçı from Turkey about wonderful aspects of Kyrgyz language

25-year-old Kübra Erbayrakçı from Bursa, Turkey is studying in Bishkek for a master’s degree at the Kyrgyz-Turkish Manas University. The girl shared with 24.kg news agency her opinion about the country, the role of the Kyrgyz language in society and employment of the university graduates in Turkey. 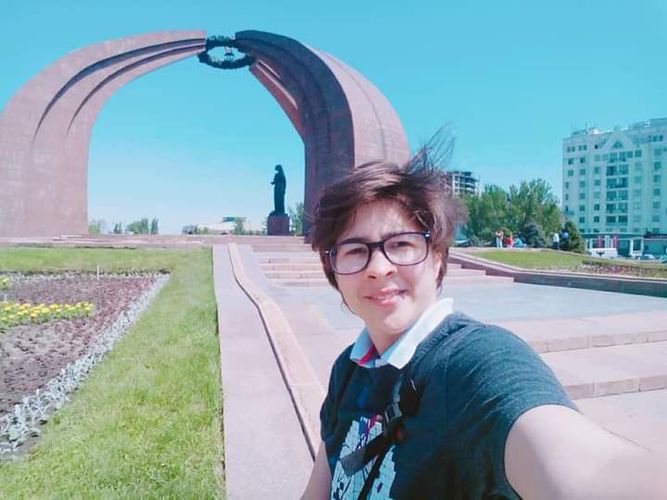 — Why did you decide to study in Kyrgyzstan?

— After graduating from school, I passed a test similar to the Nationwide Testing to enter a university, and got a certain score. I looked where I could study with such a score. Manas International University was among the Turkish universities. It was a great opportunity for me to travel abroad, learn another language, culture and people.

— How was the first year of study in our country?

— In the first year, all foreigners had to learn the Kyrgyz language. Therefore, initially I set myself a goal — to learn it at the highest level in order to speak it as a native speaker.

Most of my foreign friends criticized me for this. Many said: no one speaks this language, except for the Kyrgyz themselves, and they themselves do not really know it, therefore it is useless to learn it.

But I did not listen to anyone and did everything to bring the level of Kyrgyz language proficiency to perfection. This language helped me to better understand and get to know the people of Kyrgyzstan.

— How do you assess the role of the Kyrgyz language in our society?

— I think that every person respecting the Kyrgyz language should understand that it is beautiful and unique. It symbolizes and reflects Kyrgyz culture. City dwellers should not form a community of people who do not accept the state language, they should see its wonderful aspects.

— What impressions did you have when you arrived in Kyrgyzstan?

— I had different feelings. I saw the faces of people whom I had never seen before in my life, I mean the race. The language was also different, and, very importantly, the culture was very different. People seemed completely alien. After a while, when I had already learned the local language, the feeling of alienation disappeared.

— What surprised you in the local culture?

— National dishes. They seemed very strange to me at first. I was impressed by the national heritage of the people — Manas epic. It was nice to see people attached to their culture. The nature of Kyrgyzstan, people living among the majestic mountains in yurts, the importance of horses — all this also amazed. I have visited many places in the country: Sulaiman-Too, Sary-Chelek, Burana, Issyk-Kul ... Therefore, I can say that I am delighted with the tourism potential of Kyrgyzstan. And Kyrgyz weddings — it was also a discovery of something new for me.

— How exactly do Kyrgyz weddings differ from Turkish ones?

— Our weddings do not take place in cafes and restaurants. There is not so much food on the tables. Guests come to dance, not eat, but the presence of a cake and lemonade at the wedding celebration is especially important. The famous takı töreni takes place in the middle of the ceremony — this is when relatives and friends present the bride and groom with money and gold.

An important difference between our weddings is that guests do not sing songs, do not say long toasts to the newlyweds.

— You noted that national dishes are strange. Why?

— At first I didn’t like them, because they were very different from ours. Over time, I got used to them: manty, beshbarmak, samsy, shashlyk became my favorites. Some of the dishes were made from horse meat, so I was afraid to eat them. As you know, it is not customary for us to eat horse meat.

— Economy and politics are very important in this country. In my opinion, the people who develop and keep the republic on its feet are government workers. Mismanagement leads to a deplorable state of the republic. Low salaries of doctors, police officers, teachers put up to commit corruption. Therefore, worthy, ready to honestly serve the people candidates should be elected in political elections.

— How do employers in Turkey treat graduates of Kyrgyz universities?

— The main problem of Turkey is the employment of university graduates, no matter where the student studied. I graduated from the Faculty of Journalism. I completed an internship at one of the major Turkish news agencies. But I could not get a job due to lack of experience. Now I am studying for a master’s degree. I am planning to obtain a doctoral degree. If I find a job, I’ll become financially independent.