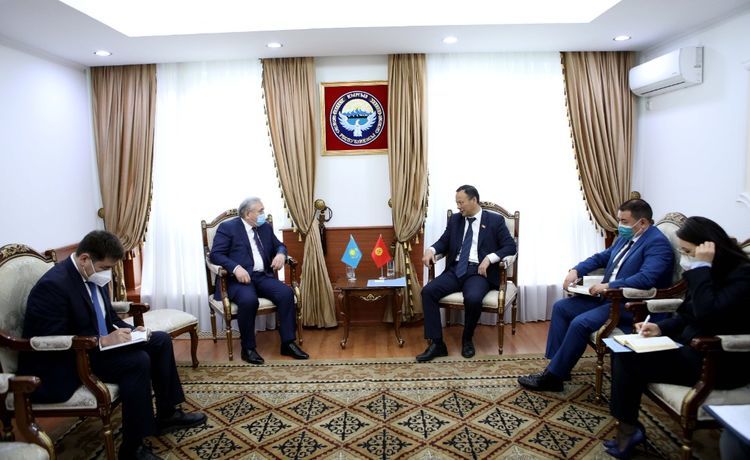 The Minister of Foreign Affairs of Kyrgyzstan Ruslan Kazakbaev received the Ambassador Extraordinary and Plenipotentiary of the Republic of Kazakhstan to the Kyrgyz Republic Kairat Nurpeisov. Press service of the Foreign Affairs Ministry reported.

According to the ministry, Kairat Nurpeisov congratulated Ruslan Kazakbaev on his appointment to the post and wished him success in further fruitful work. During the negotiations, the parties discussed topical issues of Kyrgyz-Kazakh cooperation and outlined prospects for further interaction.

Ruslan Kazakbaev informed about the gradual stabilization of the situation in the country, as well as return of political processes to the constitutional field. He especially noted that the Government would take the necessary measures to ensure the safety of foreign investments, including Kazakh ones, in accordance with the national legislation.

«At the end of the meeting, the parties expressed confidence that the Kyrgyz-Kazakh allied relations and strategic partnership would continue to grow stronger and develop in the interests of the peoples of the two fraternal countries,» the statement says.