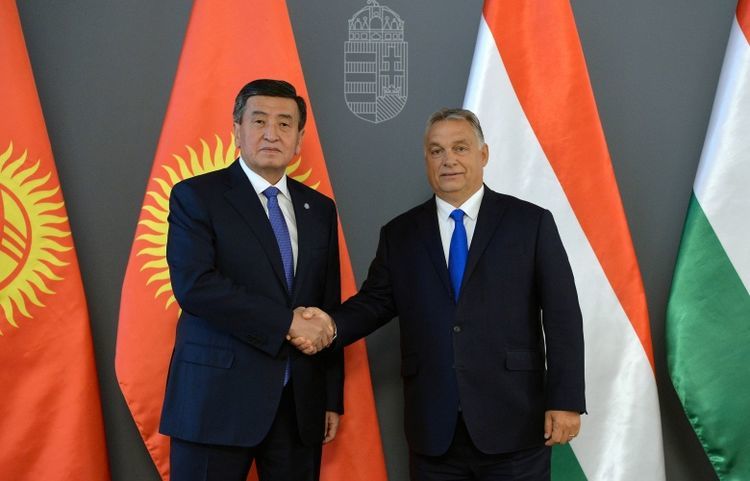 Hungary intends to provide a credit line of $ 50 million to the joint Kyrgyz-Hungarian Development Fund. The President of Kyrgyzstan Sooronbai Jeenbekov announced after a meeting with the Prime Minister of Hungary Viktor Orban. Press service of the head of state said.

Related news
Park named after writer Chingiz Aitmatov appears in Budapest
«Today is a historic day. We signed a Joint Declaration on Strategic Partnership between the Kyrgyz Republic and Hungary and a package of documents. This decision is of great importance for the citizens of both countries. Thus, we have opened a new page in our bilateral relations,» Sooronbai Jeenbekov noted.

He said the negotiations were fruitful. The parties managed to discuss all the issues on the joint agenda. He stressed that the Kyrgyz-Hungarian relations are dynamically developing on the basis of mutual respect.

The head of the Kyrgyz Republic noted that a Memorandum on the Establishment of the Kyrgyz-Hungarian Development Fund and other important agreements were signed.

«We hope that this fund will start working by the end of this year. We are pleased with the intention of the Hungarian side to provide a credit line in the amount of $ 50 million. The most important documents have been signed today. They include agreements in the field of double taxation, investment protection, healthcare, digitalization of the economy, agriculture, and others. We thank the Hungarian side for increasing the number of budget-funded places for our students from 75 to 150. In addition, the Kyrgyz-Hungarian Business Forum is being held in Budapest today, to which a delegation of entrepreneurs from Kyrgyzstan has arrived. I am confident that new opportunities will open up for our businessmen in the markets of Hungary and Europe in general,» he added.

The President Sooronbai Jeenbekov arrived in Hungary yesterday, on September 28, on a return visit at the invitation of the Prime Minister Viktor Orban.