According to her, the decision was made by the Bishkek City Court, canceling the decision of the first instance — the Leninsky District Court. It was in favor of Chonoeva.

In November 2018, the license of Elmira Chonoeva was suspended for two years. The decision was made by the Ethics Committee of the Bar Council. She appealed the decision in court.

The attorney Elmira Chonoeva, before review of the cases of Omurbek Tekebayev and Duishenkul Chotonov, was obliged by the court to represent their interests. But the defendants have repeatedly stated that they did not agree with the fact their interests were represented by a state attorney. Both of them had defense. Both doubted the objectivity and competence of the state defender.

First graders to learn in traditional mode in Kyryzstan, the rest – online 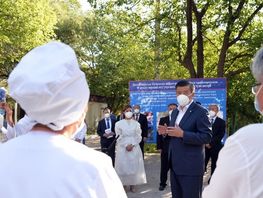