Fire breaks out at fuel and lubricants warehouse in Bishkek

A fire broke out in a residential building on Timiryazev Street, 133 yesterday at about 20.40, where, according to preliminary data, fuel and lubricants have been stored. Press service of the Ministry of Emergencies reported.

The fire spread to a neighboring house. The total area of ​​the fire was 2,600 square meters. No victims and injured were reported. At least 10 fire teams, a rescue team from the rescue service, and an operational group of the crisis control center worked at the scene.

The fire was brought under control at 23.28. 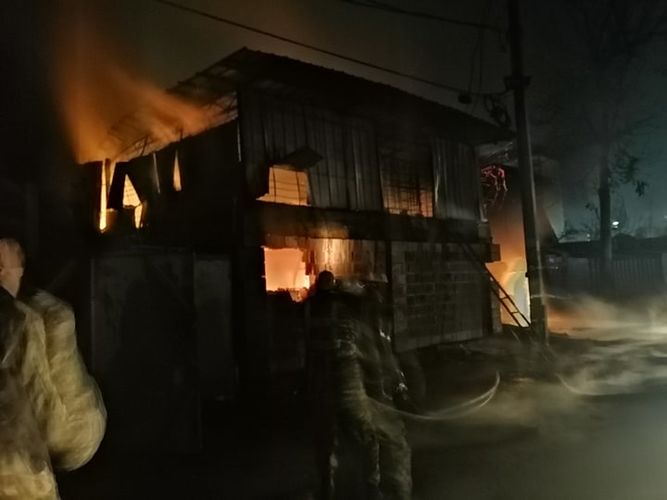 Work is currently underway to eliminate the fire consequences. The cause of the fire and material damage are specified.

Eyewitnesses told 24.kg news agency that explosions were heard during the fire. «We thought that hostilities had begun. We were scared. Who permits to store refining materials here? The fire was in the upper part only, two tanks in the basement did not explode. The neighbor’s house burned down, they ran out in t-shirts at night,» residents of the neighboring houses told.

Representative of the State Inspectorate for Ecological and Technical Safety Bolot Tuyachiev told 24.kg news agency that used oils were stored in the house.

«As you know, since January 2019, a moratorium on business inspections was imposed in the republic. We do not have the right to enter and inspect residential buildings. This is not in the power of the State Inspectorate. Despite this, a notice was issued to the owner of the house,» the official said.

Residents of Timiryazev Street say that they have repeatedly complained about the owner of this house within five years — they were afraid for their safety. The neighbors wrote to all authorities, but their appeals remained unheard.

«There was already a fire here once, we just extinguished it by ourselves, the owner of this object asked not to call the firefighters. It’s dangerous to live here,» they say.